Who Wins The Asuogyaman MP Seat To Reinvigorate Job Creation For The Youth ? 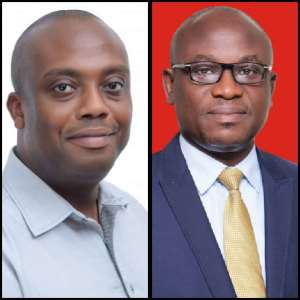 In my second epistle to Asuogyaman District, I tend to focus on the youth regarding the upcoming 2020 election. In this context, my musing is simple-why do the youth who form 64% of the District's population thrown into a vicious cycle of unemployment for the past decades?

This surely doesn’t look good for the young graduates who lived in the constituency. The 64% of the District’s population as youth is huge enough to influence decision making regarding who becomes the next MP as well as DCE but the question still stands;

Why are the youth striving to earn quality employment in a district that produces hydro power for the nation with large tracks of arable lands for cultivation of crops in commercial quantities, with an inland port at Akosombo which facilitates transportation of goods and people to and from the district and the northern regions of the country, with deposits of limestone in commercial quantities, with natural landscape and a long stretch of shoreline for the development of tourism facilities,and with serene environment and stable power for the establishment of educational and industrial installations ?

Well, we can only change this narrative of the District’s socio-economic development by rethinking how we vote and how we participate in this inclusive democratic governance of our dear constituency. Before sharing my concluding musings , i will tell you the full strength of this district with existing data to enable us rethink how we vote. Let me emphasize that MPs are part and parcel of the district assembly who are mandated to create socio-economic opportunity for the people and the very reason why MPs are ex officio members of their District Assemblies. It is therefore a misconception to say MPs are not voted to develop their district but rather to only legislate. We must , from today, question how unifying they have been regarding their ex- officio status in teaming up with their corresponding DCE to envision Development Plan that has the masterstroke to create job opportunities for the youth.

The Asuogyaman District is one of the thirty-three(33) districts of the Eastern region of south Ghana with Atimpoku as the capital. The district was created under local government instrument LI 1431 of 1988 as a result of Ghana Government re-demarcation exercise carried out to operationalize the decentralization programme in the country from the defunct Kaoga District, which had Somanya as the capital. The Asuogyaman District has been divided into six Area Councils in line with the provisions of the Local Government Act, 467(1993) namely Anum, Boso, Frankadua/Apeguso, Atimpoku, Gyakiti and Akosombo. The district is made up of one constituency with 35 electoral areas with their corresponding unit committees. Among the 35 electoral areas, only Akosombo and Atimpoku have been able to project itself regarding tourism.

The name Asuogyaman is an Akan word which comes from the fusion of ‘Asegya’ and ‘Oman’ which literally means ‘river bank state’. This is because all the major towns in the district namely, Akosombo, Atimpoku, Gyakiti, Senchi, New Akrade, Akwamufie, Anum, Boso etc. are located on either banks of the Volta Lake. There are three traditional councils in the District; Boso, Anum and Akwamus.

The employment sector as derived from the 2010 PHC data indicate that a total of 39,332 employees exist in the Asuogyaman District with private informal sector employing 78.3 percent. They include traders, craftsmanship, small businesses and SMEs. Government employs 8.3 percent of the employed population with most of them working as teachers, health workers, district assembly workers and other related government agencies. Data on employment status revealed clearly that of the 39,332 people 15 years and older who are employed, majority are self-employed without employee(s) constituting 63.2 percent, outof which females dominate with 74 percent and 51 percent males. This is followed by employees who make up 24 percent. Self-employed with employee(s) forms just 3 percent of the employed population. This shows that those who are self-employed and have employed other people constitute just a small percentage of the total employed population in Asuogyaman. Domestic employee (House help) are the least with 0.4 percent.

The Role of The Youth In Making the right choice:

OVERVIEW OF PART OF AKOSOMBO

I have walked you through data that unfold alot of questions why the unemployment rate is not encouraging for the past decades in the district. We have all contributed to this abysmal economic narrative via our action and inaction as youth. We can’t deny and remain oblivious to the partisan polarity among the youth in Asuogyaman district as one of the key reasons why we find ourselves here. There’s nothing wrong affiliating to a political party but everything is wrong if we become partisan and put politics above the well-being of the constituency. I will never force you to vote for any particular party but i will convince you to vote for my ideas as i justify them below in clear language for your consideration prior to making personal decision to vote this December 2020;

VOTE For A Visionary Development Plan

As youth, we should at a point become more oblivious to our community development and offer ourselves to co-own the socio-economic decision in our constituencies and not to co-own political parties. NOW! We need a visionary leader (MP) who can demonstrate to us that he/she has the blueprint to Asuougyaman’s Development Plan and is ready to re-align with whoever is chosen as DCE to launch a 5-10 year DEVELOPMENT PLAN for Asuogyaman District. Don’t forget that local governance is in the hands of the District Assembly with the DCE as the chief executive and the MP as an ex-officio member. Also, consider the fact that the district assembly must present an annual development plan and budget estimates to its general assembly for approval. The assembly is empowered to raise internal revenue to finance some of the development activities.

With every campaign message from Hon. Apem Thomas Nyarko and that of Hon. Paul Ansah , make sure they demonstrate to you how they can contribute to this Developmental Plans rather than getting motivated by a mere party color/slogans and handouts to aid their chances. Think about the future of this district and demand realistic developmental proposals that can reinvigorate job creation and boost economic activity in the district. Their developmental agenda message must capture the following pillars:

The above can be achieved via strategic alliance and collaborative investment designed to attract local corporations , investors and international partnership. If 50% of the above can be achieved in the next 4 years to come, Asuogyaman will become the new economic district hub of Ghana. But for now , i humbly call upon the youth of Asuogyaman District to own up and change the narrative that has trapped the district into a vicious cycle. We can do this not by insulting and not by a political war but by making informed decision that can change this generation and the next generation to come; demanding strategic and realistic developmental proposals from both aspirants. I invite all media houses within the district to strongly engage in this debate dubbed The Asuogyaman Development Plan and invite both main aspirants to the table.