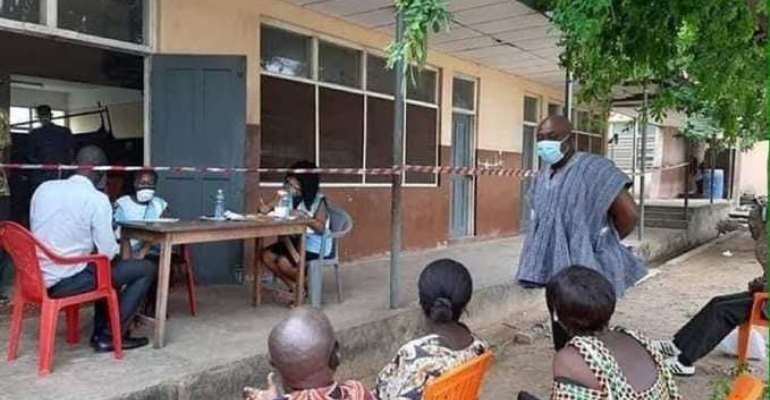 Ghana’s Deputy Minister of Trade and Industry, Carlos Kingsley Ahenkorah, on Friday resigned as a Deputy Minister in the Nana Addo Dankwa Akufo-Addo government for ‘breach of the COVID-19 protocols’

This follows the open admission by the Deputy Minister that, as a “person certified to be positive for the virus, he visited a registration centre before the period of self-isolation was complete”.

Subsequently, the report suggested that a member of his campaign team has died.

According to the report, he died on Thursday after he was rushed to the LEKMA Hospital at Teshie in Accra for medical attention.

The deceased, according to report, was among three members of Mr Ahenkorah’s campaign team in the Tema West Constituency alleged to have tested positive for the novel coronavirus disease.

The action of Mr Ahenkorah is one but many of the cases we hear in the country daily as well those that we do not hear. The Deputy Minister had said, though he was Covid-19 patient, he did not pose any harm to people who were present there, since he was asymptomatic.

“Yes, I have COVID-19, but on the first day of the registration, there was a problem at one of the centres. But knowing my status that I am asymptomatic, I visited only one centre to check on the issue. I never got in the midst of people. I drove in my car and got there, got down and spoke far away with the EC officer, who explained the issue to me. I told her I will report this to their boss and then I just left. I was very careful. It is important for people like us to know their status because whether you like it not, we will go into the midst of people”, he said.

Similar thinking or maybe worse had been the bane of the fight against the pandemic in the country, making many positive patients escape from various Isolation centres.

In April, the Ghana Medical Association (GMA) expressed worry over reports of Covid-19 patients evading quarantine in some parts of the country.

In March, a Guinean who tested positive in Tamale escaped.

The young lady, in her 20s, according to authorities, allegedly scaled the wall at the back of the hotel where she and nine others were being held in mandatory quarantine.

On April 9, two others were also said to be on the run, after testing positive for the novel coronavirus at Old Fadama, a suburb of Accra.

In May, a combined team of the Birim Central Municipal Health Directorate, the Oda police and the Bureau of National Investigations (BNI) recaptured a 27-year-old covid-19 patient who escaped from his confinement at Akwatia in the Denkyembuor District in the Eastern Region.

Kwame Oduro, another patient among a number of people who fled Accra when restrictions were placed on movement in the city, was also recaptured at Apam in the Central Region where he had taken refuge. The list goes on and on...

There have been several rumours of Covid-19 patients leaving their isolation centres at night to their homes or attend some other public gatherings.

President Nana Addo Dankwa Akufo-Addo has, on 13 different occasions, assured the country of his desire to protect the lives of Ghanaians ‘and then their livelihoods’. He has, thus, outlined several measures including stimulus packages to help contain the spread of the virus. As part of his strategy to apply tracing, testing and treating positive patients, the President’s fight has been geared at five key objectives: to limit and stop the importation of the virus; contain its spread; provide adequate care for the sick; limit the impact of the virus on social and economic life; and inspire the expansion of our domestic capability and deepen our self-reliance.

Health experts have suggested social distancing, wearing of nose masks or covering, avoiding large gatherings, among other protocols, as some of the preventive measures in the fight.

The deliberate attempt by some individuals who blatantly flout the various safety precautions as outlined by the World Health Organisation, the Ghana Health Service and the President is therefore a damper on the effort to prosecute the fight.

The country has already crossed a 20,000-mark of confirmed cases as at Sunday July 5, with over 120 succumbing to the virus.

Two government officials, CEO of the Forestry Commission and a Takoradi mayor as well as some critical health professionals, have all died of the virus.

If these statistics are not scary enough for some people to compel them to simply obey the ‘rules of the game’ then such persons are just being plain ‘Carlos’ if not ‘callous’.

The president has stated on countless occasions that the virus knows no NPP, NDC, Akyem, Gonja, Twifo or Frafra. Our actions and inactions are what will help in the fight or the spread of the virus.

We all have a responsibility to play our part in this fight. It a collective effort, let’s get involved.

A bell tolling from Wonoo

Now the bells are tolling

A man is dead.

And our hearts are slowly beating

to all our hopes and mute

And ghosts hover round

The death of Sir John, as he was affectionately called, has no doubt left many devastated, heart, soul and spirit.

The ‘Cocoase Kurasini’ or better still ‘Wonoo Krakye’, as aptly put by Former President John Mahama, was an “intriguing politician”.

He was a “passionate devotee of the Danquah-Dombo-Busia political tradition” and believed so well in his own ideals and ideas. He was a “good man who truly paid his dues” to his country.

His relationship with all manner of persons shall be missed.

Everybody will be hurt by his demise, but the people of Sakora Wonoo, his place of birth will take forever to get his replacer.

May he Rest in Peace.