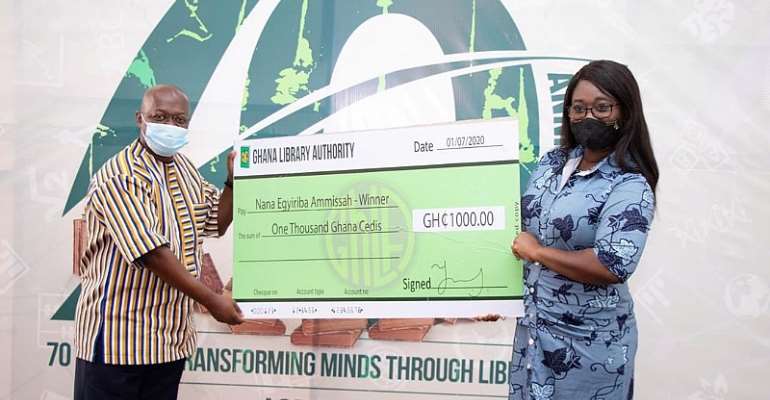 Winners of the National Short Story Challenge, an initiative of the Ghana Library Authority which was introduced as part of its COVID-19 intervention to remotely engage Ghanaian students and to stimulate their creativity through writing have been announced in Accra.

The project was launched in April 2020 and received 766 entries from across the country.

Two stories received Honorable mentions and six others were tagged as Promising Stories. Participants in these categories received book prizes from the Ghana Library Authority.

All stories in the mentioned categories will be published on the Ghana Library App for other children to read.

Speaking on behalf of the Executive Director of the Ghana Library Authority, Mr. Samson Osenda, the Head of School and College Libraries department stated, “This is an investment into their future, not just the winners but all participants.

Whether your story was selected or not, do not rest on your oars and do not get discouraged too. Use this time to sharpen your skills because the future presents more opportunities.”

“I was very happy with the number of entries received; however, I was disappointed by the number of male entries. Out of the 766 entries received, only 271 were males. As we are empowering young girls to read Science, Technology, Engineering and Mathematics (STEM) related subjects, we should also encourage our boys to read. Anybody who does not read has made an intentional effort to fail.”

He expressed his gratitude towards EPP Books and Smartline for their sponsorship, members of the jury and the voluntary readers who helped in the first reading.

On her part, Dr. Mary Ashun, the Chairperson for the jury for writing challenge said, “I thought it would be fairly easy to choose winners but it really wasn’t.

Children, you gave us delightful stories to argue about: rags to riches myths, fearsome women warriors, and tearful moments of confronting the death of a loved one. We were mesmerized by your tales. Our last meeting to decide the winners was fulfilling, as we poured over why each story deserved to move up.”

She further stated, “Our country needs more readers, more communicators of the spoken word and with this competition, we realized we do have some! Even more importantly, it was evident that more work needs to be done to encourage more of us to read and what better place to start than with children.”

She noted, “We always say at Smartline that, if you come to us with anything associated with reading and writing, you’ve struck the right chord. So if the GhLA in spite of this pandemic has found another avenue to engage students to display their creative skills in writing, then they deserve to be recognized for their effort.”

Four suspects arrested over attacks on motorists along GIMPA...
50 minutes ago

Chinese man crushed to death at Suhum
50 minutes ago