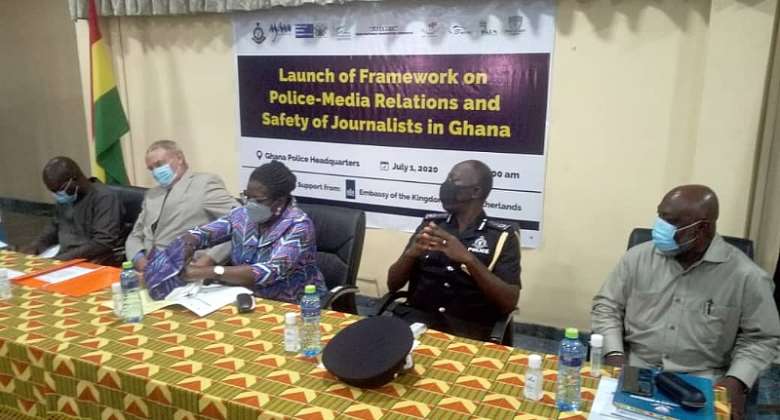 The Ghana Police Service (GPS) in collaboration with the Media Foundation for West Africa (MFWA) and other key stakeholders, has officially launched the Framework on Police-Media Relations and Safety of Journalists in Ghana.

Work on the framework was started in 2018 during the tenure of ACP David Asante-Apeatu as the Inspector General of Police (IGP) on the back of numerous incidences where media personnel were brutalized, manhandled in one way or the other.

Following several discussions in the past two years, the GPS, MFWA, as well as National Media Commission, Ghana Independent Broadcasters Association, Editors Forum, Ghana, PRINPRAG, Ghana Community Radio Network, and Ghana Institute of Journalism have finally completed the framework with funding support from the Embassy of the Kingdom of the Netherlands.

The Framework is aimed at strengthening the relations between the media and the Police while providing modalities for promoting and protecting the safety of journalists as well as addressing violations against journalists.

Launching the framework at the Police Headquarters on Wednesday, July 1, 2020, Chief Director at the Ministry of Interior, Mrs. Adelaide Anno-Kumi shared that she is confident it will achieve its aim to ensure there is a better working relationship between the Police and the Media in order to address violations against journalists.

“I hope that this framework will help address all the concerns of the media reports causing either heightening tension among the general public.

“I believe also that this initiative is a boost to foster a good working relationship between all the institutions”, she said.

Giving an address as a representative of the IGP, COP Dr. George Akuffo Dampare commended all stakeholders for the role played in putting together the Policy Framework. According to him, he wants to see the framework being put into use for the benefit of the two institutions in particular to promote good governance in general.

Taking his turn to give his address, the Executive Director of the Media Foundation for West Africa, Mr. Sulemana Braimah stressed the need for the Police and the journalists to have good relations.

He explains that both parties play the important functions of protection of democracy and the rule of law, as well as upholding the rights of the citizenry.

He adds that ahead of the 2020 General Elections and the in the midst of the Coronavirus crisis, this is the perfect time to launch the framework.

In furtherance, Mr. Sulemana Braimah called for a strong corporation between the Police and the Journalist going forward. While urging the media to provide the Police with key information when needed, he also charges the Police to protect the journalist in the discharge of their duties.

Other key figures who graced the launch of the Framework on Police-Media Relations and Safety of Journalists in Ghana today include the Ambassador of the Kingdom of the Netherlands to Ghana, H.E Ron Strikker, Professor Kwame Karikari (a lead consultant on the framework), COP Nathan Kofi Boakye and other Commissioners from the Ghana Police Service, together with representatives from the NMC, GIBA, GJA, GCRN, EFG, PRINPAG, as well as GIJ.

Latest Photo Reports
Catch up with all the political quotes from our politicians.
Advertise here
More from General News
ModernGhana Links
Ghanaians must be involved in the process of negotiations with IMF – Economist to gov’t
Dr. Anyah picks Africa’s Most Respected CEO Award in Mauritius
PRINPAG elections: Vetting of candidates completed ahead of polls on August 12
TOP STORIES