By Samir TOUNSI, with Matthieu DEMEESTERE in Brussels 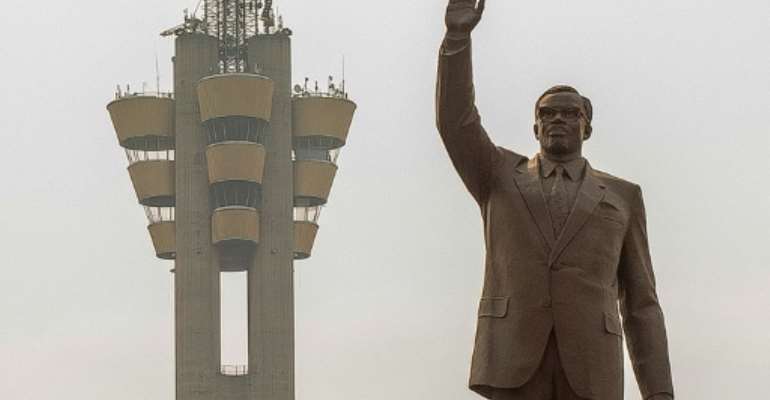 The imposing statue of first prime minister after independence Patrice Lumumba dominates the traffic in Kinshasa. By Arsene MPIANA (AFP)

When the Democratic Republic of Congo celebrates 60 years of independence from Belgium on Tuesday, it will also remember Patrice Lumumba, one of its enduring national heroes and icon of those who demand that former colonial powers face up to their history.

Lumumba, a leading member of the independence movement, entered the history books on June 30, 1960, the day that the Republic of Congo, as it then was, formally broke away from Belgian colonial rule.

In the presence of Belgium's King Baudouin, Lumumba -- the 34-year-old prime minister of then president Joseph Kasavubu -- launched into a coruscating speech, accusing the former colonial masters of racist maltreatment and forcing "humiliating slavery" on the Congolese people.

"We experienced the slurs, the insults, the beatings that we had to undergo morning, noon and evening, because we were negroes," he proclaimed.

It was a withering response to King Baudouin whose speech shortly before had saluted the work of his royal ancestor Leopold II, insisting that he was not a "conqueror" but had come on a "civilising mission".

On Tuesday, the city of Ghent will mark the 60th anniversary of Congolese independence by removing a statue of Leopold II, who ruled from 1865 to his death in 1909.

Statues of Leopold and, indeed, Baudouin have been vandalised. A Belgian collective "Let's fix history" accuses Leopold of having killed "more than 10 million Congolese".

Seen here in 1960, Patrice Lumumba had two and half months as prime minister before being ousted and executed in January 1961. By - (AFP/File)

Conversely, a small Patrice Lumumba square was inaugurated in the centre of Brussels in 2018, near the district of Matonge, which has a large Congolese population.

"This is extremely important for the reconciliation of memories in Belgium, for Belgium to assume its colonial past and for the pride of Afro-descendants", explains Kalvin Soiresse, 38, a member of the Brussels parliament of Togolese origin.

Toppled from power, humiliated and tortured, Lumumba was executed by firing squad in a savannah 50 kilometres from Elisabethville (the current Lubumbashi) by Katangan separatists and Belgian mercenaries. He was just 35.

Six months after independence day, the Congo was in crisis. Mutinies and uprisings, the military return of the Belgians and UN interference had stoked a furnace of chaos.

Patrice Lumumba (right) and Joseph Okito (L), vice-president of the Senate, pictured together in November 1960, were executed together in 1961. By - (AFP/File)

Overthrown by army colonel Joseph Mobutu's "peaceful revolution" in September 1960, but still working to put a government together, Lumumba had become a walking target.

His nationalism and his appeals to the Soviet Union in the middle of the cold war had turned the Belgians and the United States, who feared losing control of the Congolese cobalt, against him.

"In no time Lumumba became a martyr of decolonisation, a hero for all the oppressed of the Earth, a saint of godless communism", says David Van Reybrouck in his book "Congo, a history".

"He owed this status more to the horrible end of his life than to his political successes. He was in power for barely two and a half months."

Belgium recognised its "moral responsibility" in the assassination of Lumumba, following a parliamentary commission of inquiry in 2001.

The Belgian Parliament is planning a new commission on all aspects of the colonisation of the Congo, Rwanda and Burundi.

Tuesday will be a quiet day of commemoration for Lumumba. The coronavirus means that no ceremony is planned and the authorities have instead announced a day of "meditations".

In Kinshasa, a statue of Lumumba, right hand raised to the sky, dominates the traffic from its pedestal in the middle of the huge boulevard which also bears his name for 10 kilometres between the airport and the city centre.

In December 18, 1960, there was still much support for Lumumba in Stanleyville (now Kisangani). By - (AFP/File)

Beyond Palu, political figures like Lambert Mende, the former spokesperson for Joseph Kabila, claim the nationalist heritage of Lumumba.

"To be lumumbist today is to lead the fight so that the Congo is free to choose its economic partners," he says. "This is not always the case."

How he is remembered across the nation is problematical.

At high school, the figure of Lumumba is taught in a "lapidary way", says high school teacher Egide Mawaso.

He was betrayed by other fathers of independence, including the future dictator-marshal Mobutu, then his modest chief of staff.

And as minister of defence, a post he held simultaneously with prime minister, Lumumba ruthlessly quelled an uprising in Kasai, the province of origin of the current head of state Felix Tshisekedi.

"We do not know what his real ideology was," Malawaso said.

The notion that he was a communist, encouraged by the Patrice Lumumba University in Moscow during the Cold War, may also be suspect.

Patrice Lumumba, warmly greeted here in Brussels in January, 1960, remains an icon for Congo and for all former colonised countries. By - (AFP/File)

"Communist, he was not," declares historian Jean Omasombo, author of a book on Lumumba.

"He repeated several times that he was a nationalist and not a communist.

"To say that Lumumba was caught in an ideological game is totally false. It was colonial propaganda," insists the historian.