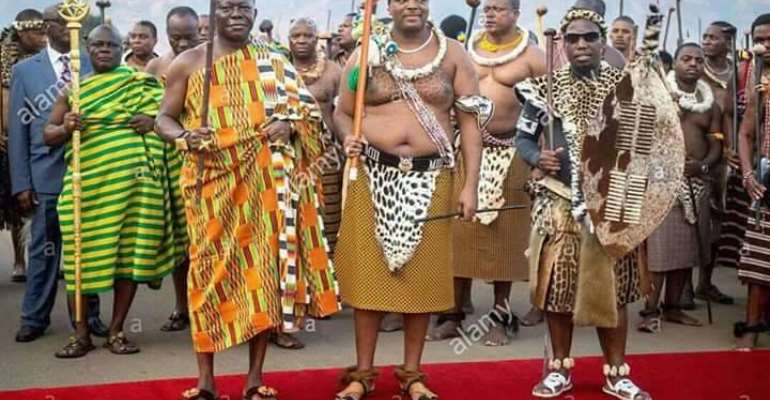 In Akan Religion, we believe that Onyankropɔn (The One God), the Supreme Being lives above the Earth..... Ewiem or Ɛsoro; the Twi language word for the Sky.

Akanfoɔ believes that Onyankropɔn created humans at ADANSI. After completion, ONYANKROPƆN retired to Ɛsoro (the Sky) to rest and maintain the controlling role in the affairs of humankind.

In Akan theology Onyankropɔn then assigned intermediaries known as ASƆFOƆ/ƆSƆFO, meaning the one who receives (ƆSƆ) something, receives commands and commandments from above; and then shares that (message of deliverance and goodwill) with humankind. In receiving information from ONYANKROPƆN above, SƆFOƆ/ƆSƆFO is spiritually possessed by the powers of ONYANKROPƆN. This makes the ƆSƆFO prance about, in a frenzy; arms raised and pointed above in receipt mode, he or she begins to speak a language that his audience/congregation cannot understand.

Asanteman was the last and most powerful Nation to emerge in AKANDƆM. It started with the unification of 12 Twi-speaking Aman or States in 1701. Asanteman borrowed ideas from established AKAN states notably Dankyira and Akwamu...... both of which later became part of the Asanteman sphere of influence and control.

By the year 1820, the state of Asanteman extended beyond what is now the modern State of Ghana.

Ɔsɔfo Anokye (ƆKƆMFO ANƆKYE) from Awukugua (etymology AWƲKU DWA, I believe) at the time.... 1680s..... part of the Akan State of Akwamu.......Okɔmfo Anɔkye was the Last and Most Powerful Akan Ɔsɔfo or Priest sent by Onyankropɔn as his intermediary to uplift Akanfoɔ. The founding of the Asante Nation materialized, and remains powerful and relevant forever, because of the Spiritual input from Onyankropɔn provided by the Great Ɔsɔfo Anɔkye, to Ɔsɛi Tutu Kofi (Ɔsɛi Tutu Ɔpemsoɔ I), the Founder and the first Asantehene.

Onyame (Yɛ nya no mei)......; meaning the One who provides us our needs, and satisfies us, and fulfills ALL of our humanly needs; Otwereduampɔn.....; meaning the "Strong Tree" on whom we lean for support without falling.....; Ɔbɔadeɛ Ɔtɔtrobɔnsu, meaning the Creator...... Who created everything.... a ɔbɔɔ Nsuo, (san) bɔɔ Awia; Otumfoɔ Onyankropɔn, meaning, The Majesty/The Magisterial One, All Powerful One; are some of the accolades that AKANFOƆ use to affirm and praise their Creator.

Onyankropɔn created ASAASE or the Earth. Akanfoɔ call the Earth, Asaase Yaa, whose provision, patience, and forbearance is similar to that of our Mothers. Hence, the Akan saying ASAASE YAA AMPONIAMOA, meaning our Mother Earth who does not reject (ƆMPO) anything we throw at her, but rather sustain us. This explains why we propitiate Asaase Yaa with APAEƐ, MPAEƐBƆ (Prayers)...... Asaase Yaa Mponiamoa, gye nsa nom. She is our sustenance. We appreciate her tolerance, and all that she provides us.

In the Sky, Akanfoɔ believe that Onyankropɔn is surrounded by his other creation..... AWIA or the Sun; Bosome or the Moon; and the children or Nyankonsoroma (Nsoroma), the Stars. Each plays a complementary role by providing Sunlight and Moonlight, to make life, and life activity manageable for humankind.

Akanfoɔ have intimate knowledge of the Nyankonsoroma or the Stars. There's always one of the Stars which lies closest to the Moon. The Star closest to the Moon is called by AKANFOƆ as KYƐKYƐ. It stands out from the others. Akanfoɔ believe that, KYƐKYƐ Star seeks exclusive special relationship with the Moon. Hence, the Akan saying:

Meaning KYƐKYƐ Star, also referred to as "ƆHENE YERE", because of its close proximity to the Moon; seeks absolute exclusive recognition, just like a Wife does in marriage. The American saying "You want to be a Star', implies the same meaning, to anyone who tries to "stand out" from the crowd.

However, it is Onyankropɔn who provides sustenance to the Moon and the Stars. Onyame is the Supreme Arbiter. Therefore, the Akan aphorism:

The Star is nothing without the support of Onyankropɔn. Like Humankind, the Stars depend on Onyankropɔn for sustenance.

The lesson to learn is that, It is Onyame who makes things happen for everyone. He provides the light that makes the Stars shine. 'Obiara hia moa." As the Bekyem Teachers Training College Motto observes: "Obi dan obi."

Asanteman made Ɔkɔmfo Anokye even more powerful, and better known. There is complementarity, and mutual benefit in good relations and in assisting each other.

In Akan Chieftaincy, and governance, the Akyeame (meaning ƆKYE AMENE.... He's able to decipher and translate the King's speech to the public, and vice versa. Amene is the brain tissue. So Ɔkye Amene implies he's able to pick the King's brains, his inner thoughts.) carry POMA or Staff as insignia that legitimize their office and position. These Akyeame Poma or Akyeampoma have finials that educate.

The metaphor provided by the finial, is rather instructive.

It implies that among the "Nyankonsroma".... Akyeamehene is superior by virtue of his position. And, he is the closest to the Moon, in this case represented as Otumfoɔ Santehene. When the Twelve Otumfoɔ Akyeame line up, the Akyeamehene stands closest to Otumfoɔ.

Yet, on the grand scheme of things, Otumfoɔ Santehene is their benefactor, the Supreme One. Otumfoɔ Akyeamehene publicly exudes his power. At the same time, he understands the limits of his power.

The attached photo shows Otumfuo Santehene as the Special Guest of Honour at the 2015 eSwatini (the country formerly known as Swaziland) Reed Dance also known as Umhlanga. Otumfuo is holding a traditional Swazi Royal Staff, as does his host, King Mswati III of Swaziland.

Whatever our ancestors did, made perfect sense; and remain relevant.