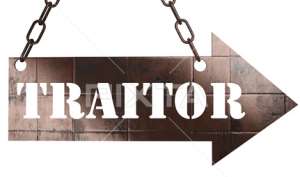 "Traitor" is the title of a book written by Holdbrooks Jr., a young American who joined the US military with the expectation to become a better American, a better soldier, a better person. To contemplate reverting to Islam is the least of Holdbrooks' dreams and he never gave a thought of it.

Traitor?, is indeed not only a story of adventurous young soldier's journey to Islam; it is an exposition and graphic account of the inhuman treatment, and cruelty the guards meted on prison inmate at Guantanamo bay (GTMO), Cuba.

Guantanamo is not a prison in the real sense of the word. It is "a hell on earth," as the author described it in his book-It is a wilderness and a detention and torture camp, where accused prisoners of the so called war on terror are hovelled and hustled together.

Lamenting about the horrible condition of inmate at the camp, Holdbrooks said,"stress positions, blaring music, ice cold rooms, screaming and such abuses were routine. The use of certain disturbing tactics-such as showing photos of dead women and children to a prisoner and then telling him it was his family, or playing sound of a woman screaming while being raped and telling him it was his wife- were all sanctioned methods of interrogation. "Acceptable" also including, Hodbrooks further stressed, punching or kicking prisoners as a form of "attention grabbing", adding that "it was not uncommon to see prisoners in stress positions which caused muscles failure and loss of bowel control, and then having further abuse for being unable to endure that."

According to Holdbrooks, guards were indoctrinated so much so that they are filled with hatred toward prisoners and deal with them mercilessly with little or no sympathy. Our superior officers told us to "remember, we are at war with islam, we are at war with the middle east, the Arab people. These people hate you, they hate everything about you, and they will kill you the first chance they get. These people hate freedom; they beat their women, cut off the hands of thieves and kill you for drinking alcohol. these people blow up themselves and others to spread their religion of hate across the world. Remember: these are not people. they are hate-filled, evill, terrorist dirt-farmers, and they will stop at nothing to kill you. Never forget this! never forget 9/11! never forget why we are fighting!"

Against the backdrop of this rather complex situation, Terry C. Holbrooks Jr. accepted Islam. "His being humble and fair to the prisoners paid back by expanding his knowledge about the world and introducing him to a religion that brought him peace and strength to face the aftermath of his service and encouraged him to rally against this injustice." A prisoner( detainee 590 by name Ahmed Errachidi, alias the General or the Professor) pronounced the formal declaration of the shahada to Holdbrooks in his detention cell.

I became too curious and so eager to know the truth about the much talked about ill treatment of prisoners in GTMO by the media in America. From the revealation of the author, I got to know why American soldiers lost minds and hearts in the battle fields in Iraq and Afghanistan. The severity of the torture on the prisoners, the mercilessness and the wanton destruction of lives and property had caused psychological trauma for US soldiers.

"Traitor" Is a small but well written 164 page book. As a Muslim, the lucid narration by the author that chronicled his tribulations and trials, as an atheist who was attracted and subsequently converted to Islam by the prisoners' strong faith to die in their cells, rather than to admit guilt and denounce faith due to torture, the book will serve as a moral booster and a tonic to your belief in Allah.

As it gives a detailed account of torture and abuse in the detention facility, actions which the author said are not officially sanctioned by the US government, the book will no doubt give a fillip to human right groups to put pressure to compel American president to to close down the facility. This is long overdue, and it is the right thing to do because the author confirmed that about 90 percent of detainees are innocent victims of war on terror. To the American establishment, Terry C. Holbrooks Jr. is a traitor who sold out his country. The world sees him differently. He is a man who depends the course of justice. He is a hero and a man of honour, integrity and probity.

For anyone who wants to see the dark, hidden and hideous sides of the American system, the traitor will be a compelling read.