Boakye Djan, The Architect Of Chaos Should Leave Ghana Alone 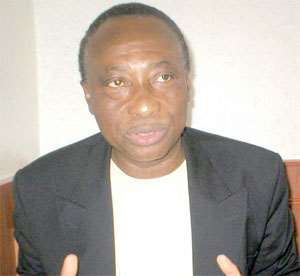 In the latter part of the 18th century, Immanuel Kant put forward a theory that democracies do not go to war with each other. Roughly, about half a century later, Alexis de Tocqueville, in his ‘Democracy in America’, reiterated similar sentiments. After de Tocqueville, it took over a hundred years for it to come under academic scrutiny. Though it has not been proven conclusively, its validity hovers around the 90th percentile.

The major push back, which is having a lot of traction recently, is that it turns to be aggressive towards dictatorships, which flies under my radar. The foregone is my subtle way of validating the superiority of democracy regardless of its flaws. Though it’s under lethal attack by cultural Marxism, until the curtain is drawn it will remain at the pinnacle of human civilisation.

While promoting the trajectory of civilisation, it is imperative to echo that civility only exists among human beings and a luxury in the animal kingdom where the sharpest and the toughest paws dominate. As human beings, we think, rationalise and come to a mutually acceptable conclusion when confronted with problems. Civilised beings don’t fight and tear into each other, especially, when we live in a democracy. It’s only uncivilised bunch of people with animal instincts that resort to violence when confronted with problems.

Since the inception of the Fourth Republic, every election cycle has been fraught with imminent violence, which keeps Ghanaians on needless tenterhooks. Unfortunately, this election year is no exception. And the main bone of contention is a compilation of a new electoral register. This normal and routine EC exercise has been turned into a political football match.

All the argument for and against are overwhelmingly partisan. However, the hard evidence seems to point in favour of the EC position. The first voter's register, which kicked off the Fourth Republic, was in 1988. The second took place in 1995 and subsequently followed by 2004 and 2012. There is an average of eight years between each new compilation. There is no justification for the brouhaha against the EC when it is well within the time for a new register.

Now, for those of us who take keen interest in Ghanaian politics, the rhetoric from the foot soldiers are usually expected, but when a stalwart member like a retired army officer, Boakye Djan, speaks we pay attention. This is a man who plotted a successful coup against Frederick Akuffo. A happenstance that, with hindsight, should never have happened if not because of the impetuous behaviour of his buddy, Flight Lieutenant Rawlings. Because the groundwork had already been laid by the SMC government to return the country back to civilian rule.

This is a man who, according to his own words, went into the military, not as a vocation, but to implement his own views in life. His beliefs are based on the theory that most enduring political change came through civil war like the Chinese, Russian and the American. And his conviction was that uniting Africa was not possible without a civil war, perhaps, to institute his wet dreams of socialism on the whole continent.

I am not sure whether to hold him accountable for an idea that was formulated when his testosterone was at full blast, but to be pointing to the direction of civil war as the only outcome of a baseless and manufactured problem at the age of 75 points to a twisted mind.

In the radio interview which gave birth to this piece, he claimed that most civil wars in Africa had come about as a result of disputed elections. And that, the current government is wilfully leading us into a civil war, which he emphasised if they want it, they will get it. For me, it is a strange position to hold especially when we live in a civilised constitutional society governed by the rule of law. If they are not happy with the tangent of the EC, the law courts are there for redress. And this brings me to what happened on 28/05/2020 at the Tema High Court.

Apparently, some of them believe in the rule of law, so they started their journey by using the courts and abandon it along the way. The question is what is the point of filing for a restraining order then fail to turn up at the hearing. It tells me that their primary aim is to disrupt the EC then ultimately plunge the country into chaos. Some may process Boakye Djan’s rhetoric as political talk, but I don’t take it lightly, especially, when it is coming from an ex-serviceman with a history. This guy is dangerous, and he has been playing with words.

From his own pronouncements, he is an ideologue who clearly still harbours violent tendencies from his primary aim of joining the army. In one of his interviews he tried to distance himself from the atrocities of the eighties, for example, the killing of the judges. But the reality is incontrovertible.

It was his primary ideas that gave birth to Rawlings. So, if he thinks what happened under Rawlings were unpardonable crimes that shouldn’t have seen the light of day, then, he is a huge disappointment to the history of the country and for that matter should keep his mouth shut and leave the country to heal. Because there are still people who are licking their wounds from the 80s.

We are suffering media tyranny; they interview us, create wo...
1 hour ago

Attempt to put Achimota Forest in the hands of private perso...
1 hour ago