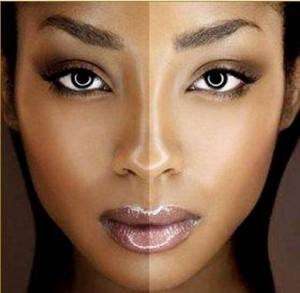 The melanocytes cell produced the black pigment melanin which gives the skin the colour, absorbs and protects the harmful ultraviolet rays which are produced naturally.

Persons with black skin, in a tropical area such as Ghana, need an amount of pigment melanin to absorb and protect the skin from the sun rays because the sun rays are not filtered.

The use of all sorts of creams, soaps and other products that have high concentration of steroid, hydroquinone, mercury and other chemicals fights and prevents the pigment melanin from multiplying and performing its task of absorbing and protecting the skin from harmful ultraviolet rays.

The pigment melanin begins to deteriorate gradually and the skin begins to look pale and gives way to the light and white skin. That is how bleaching takes place on the skin.

Benefits of the black skin
The article 'Skin bleaching - is it pleasing in the eyes of the Lord?' written by Professor Badu Akosa, a pathologist, explained that there were six skin types ranging from the very sensitive, which burns easily and never tans, to the insensitive, which never burns and is deeply pigmented.

'The sun rays may be beneficial in producing Vitamin D, which is very necessary in the body's use of calcium and ensures the strength of our bones but more importantly, the rays are dangerous,' he said

He explained that the ultraviolet rays on a sensitive skin type caused premature ageing evident by wrinkling caused by the destruction of the elastic fibres, which maintain the integrity of the skin, thinning of the skin and white patches from increased keratin.

'Ghana's geographical position as the country closest to the real centre of the world, means the sun rays are almost perpendicular to the earth surface, unlike other countries beyond latitude 30oN or S where the rays are oblique,' he said.

Reasons for bleaching
Discrimination against the black skin, especially during the era of apartheid and colonialism, still persists, making some black skinned people feel inferior. Consequently, black people all over the world currently, including West Indians, Latinos, Asians and African American, have all turned to bleaching.

This has led to the definition of the beauty of a woman in Africa as the one who is fair, making most African men to prefer the light skinned to the black skinned woman.

A sociological study by Evelyn Nakano Glenn, a professor of gender and women's studies at the University of California, Berkeley, said in a NYTimes.com post on skin whitening, points out that 'It is not as if dark-skinned women are imagining a bias. Among African-Americans and also Latinos, there was a clear connection between skin colour and socioeconomic status. It's not some fantasy. There is prejudice against dark-skinned people, especially women in the so-called marriage market,' she said.

When asked why she would want to be fair,  26-year -old Nanayaa said 'I want to look attractive and also get the opportunities other fair ladies are getting'.

This is what 18-year-old Belinda Anane also had to say when asked the same question:

'People who tone their skin look prettier and their skin alone attracts great opportunities for them.'

Many would ask if the journey to the fair world could be reversed. The answer is yes and no.

According to Madam Boa- Amponsem, 'one can only reverse a bleached skin depending on how deep the damage is to the skin.'

'When the skin is badly damaged then it would be very difficult to reverse', she stated.

'However, it could be reversed but would take a very long time and it is also not likely for the person to get the natural skin as it used be,' she said.

She added that bleaching could damage some places on the body permanently and could not be changed.

When asked if there were any effects of bleaching on pregnant women, Madam Boa-Amponsam stressed that bleaching during pregnancy could have serious implications on the foetus leading to deformity of the baby.

She said bleaching was not recommended and was no way good for the skin.

Health & Fitness
Powered By Modern Ghana
Ghanaians Share Thrilling Experience About Pepsodent
Cravings During Pregnancy – Foods To Avoid
All You Need To Know About Hirayama Disease
Leg Pain Or Muscle Cramps? - It Could Be Symptoms Of Deep Vein Thrombosis
Don’t Let The Fear Of COVID-19 Stop The Fight Against Breast Cancer
Live Strong With Iron Call For Ghanaians To Eat Diet Rich In Iron
Quick Blast Body Weight Circuit Training: Herbalife Nutrition Shares Insights
An Effective COVID-19 Vaccine: Will You Take It Or Will You Not?
Mental Health Plays A Role In Overall Wellbeing – Follow These Simple Steps
COVID-19 Updates Live Dashboard
TOP STORIES