11 things that mean more to men than "I Love You" 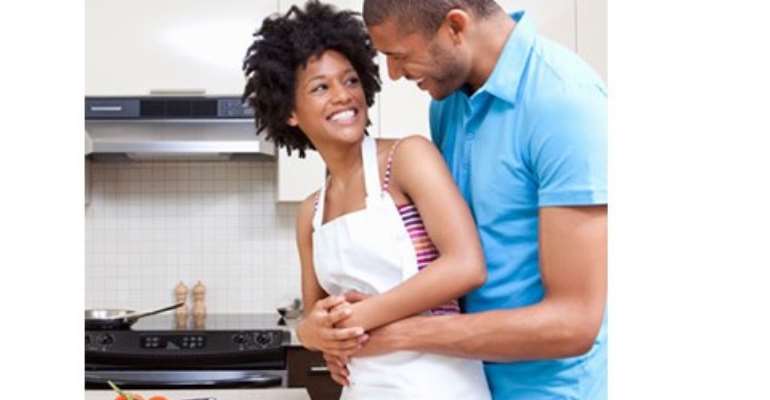 Actions speak louder
You've heard it before: Men are visual; women are verbal. Men are impulsive; women like to analyze things. Men are from Mars; women are from Venus. So since husbands and wives are opposite in many ways, it makes sense that male and female hearts swell for different reasons.

While you probably smile when your mate says, “I love you,” those same three words from you may not do much for him. Here, 11 gestures that show you care and why they're more meaningful to the guy in your life.

1. Your undivided attention
"When the male brain sees you checking your iPhone during dinner, it interprets that as 'I'm not important,'” says marriage therapist Mike Dow, PsyD. That's because men's brains evolved to do one thing at a time while filtering out all other stimuli, he explains.

Even though women function differently (you know firsthand how well you multitask), your man will appreciate you focusing solely on him. “It says, 'You are my priority, and I love you,” adds Dr. Dow. So make eye contact while he's talking and limit interruptions.

2. His favorite meal
That old adage is true: “The best way to a man's heart may be through his belly,” says Dr. Dow. “Knowing what he likes to eat without having to ask him demonstrates how well you know him. And the couples I've treated who know small details about each other have the happiest marriages.”

But maybe your husband likes everything you make! In that case, try breaking out the pumpkin pie. Research by Alan Hirsch, PhD, of the Smell & Taste Research Foundation in Chicago has shown that that sweet scent arouses men more than other aromas.

3. Wearing that dress he loves you in
Dolling up sends the message that you still want to look good for him, no matter how long you've been together. “Men's brains are wired to respond to visual cues more than women's brains,” says Dr. Dow. “Seeing you in that sexy dress shows him you desire him.”

And a scarlet number may work best. A study by researchers at the University of Rochester in New York found that ladies in red are an aphrodisiac to men.

4. Taking care of yourself
Shedding stress, eating right, exercising, quitting smoking and even pampering yourself may sound like treats for you, but they're also ways to show you love him.

“This communicates, 'I want to have a long, wonderful life with you, and I'll do whatever it takes to prevent you from experiencing the grief of losing someone,'” says Dr. Dow. What better motivation is there to get healthy?

5. Complimenting him
Throughout time, men have had to fight and provide to attract and keep women—and they aren't afraid to pull out the masculinity measuring sticks when potential competitors come around. Let your husband know you think of him the way he'd love to be seen: as a provider, problem-solver, handyman, sex stud and knight in shining armor.

"Genuine compliments on his looks and strength confirm that you admire him, which equates to love,” says clinical psychologist Andra Brosh, PhD. When he pops the lid on the jam jar with ease, mention that you enjoy having such a strong man around. He'll beam—and chalk it up as a reason you chose him over all those other guys.

6. Encouraging him to take time for himself
While you may not hesitate to ask for you time, your husband may have trouble verbalizing what he needs. Occasionally, suggest he take a day to relax with friends, play video games, work on the car or just sleep in.

“This shows support and allows him the freedom to do what he needs to be his best self,” says Dr. Brosh. Your husband will see hassle-free, worry-free, chore-free time as a loving reward.

7. Asking his advice
Your man wants to feel like an important part of your world. On top of that, he's a hard-wired problem-solver. Ask for his opinion on how to approach the boss for a raise, and you prove you trust and value his judgment.

“When a man can fix something, he feels competent and useful,” says Dr. Brosh.

“Asking for advice shows that you rely on him and that there's a place for him in your life. Need, dependency and love go hand in hand.”

8. Thanking him for the little things
Next time your husband drives the kids to school or takes out the trash, express your gratitude. “We're rushing through life, we forget to notice the good deeds and guys forget to say what they need from you, but they have feelings, too.

So say, 'I really appreciate that,'” says licensed marriage and family therapist Carin Goldstein, creator of BetheSmartWife.com. Giving thanks will improve his attitude and infuse your relationship with a feel-good energy.

9. A lengthy hug
Instead of a quick peck before running out the door, choose a lingering embrace. “While women connect verbally, men connect more through touch,” says Goldstein. “Hug for at least seven seconds. It's a long time, but there's something about that number where the hold ends up really giving him something.” And there's no doubt you'll like it, too.

10. A quickie
Making love for an hour is nice, but once in a while, have sex for just a few minutes, suggests Dr. Dow. Although women get that loving feeling with a rise in oxytocin (what you release during that post-coital cuddling session), men feel it with an increase in dopamine, the chemical they release during sex which stimulates the mental pleasure-and-reward center, explains Dr. Dow.

“I hope that most of the time, your lovemaking is full of foreplay and romance. But other times, just have sex."

11. Letting him vent
The latest office drama or family fight plays on his emotions more than he'd like to let on. So create a safe space for your guy to let his walls down. “Listen to his worries or problems without trying to fix them,” advises Dr. Brosh. “It shows him you don't deem him weak or inadequate and affords him a place in the relationship to share that part of his life. Moreover, it shows you care.” If he comes home from work in a bad mood, ask him if he wants to let it out. If not, that's fine—but he may need a prod to open the floodgates.