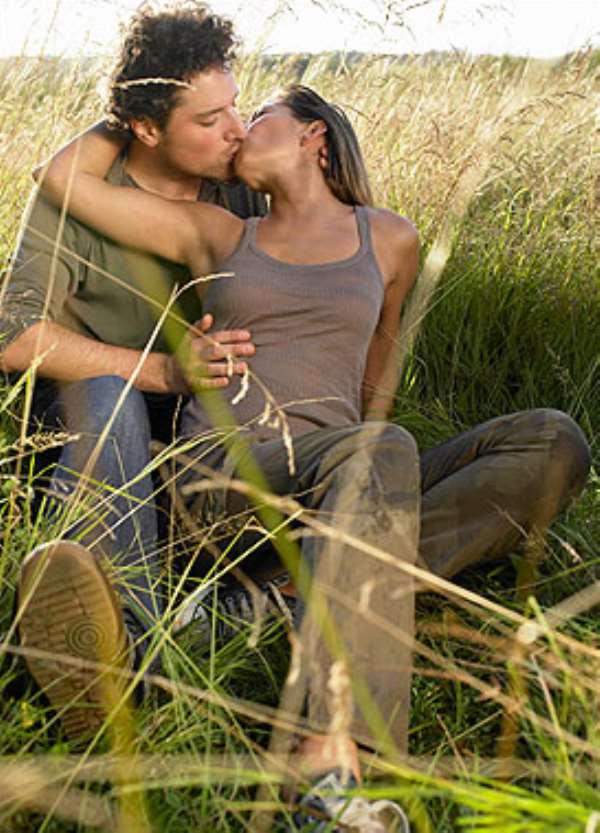 Is it in his Kiss?

Oh, yes. Osculation, the scientific term for kissing, in many ways says everything about your compatibility with your mate and the health of your relationship. We asked scientist and journalist Sheril Kirshenbaum, author of the new book, The Science of Kissing: What Our Lips Are Telling Us, to tackle some of your top questions when it comes to smooching. Curious to know what happens inside our brains and bodies when we do it? Wondering whether a kiss means more to you than to your guy, or whether you can make your make-out session even better? Read on.

While two strangers might serendipitously find themselves chemically compatible, more often the best kisses grow out of an emotional connection and ambience, Kirshenbaum says. "So much of a great kiss is understanding the needs and desires of another person - there's no one-size-fits-all formula to it," she says. How-to guides "focus on where to put your hand or how to set the mood, when so much of it is intuitive that you make the person comfortable, secure and safe. It's an ultimate expression of how you feel about them."

Kissing comes naturally but our techniques can evolve

We're kissed from birth and other social animals seem to kiss, too. Bonobos - a type of Chimpanzee - have been known to smooch for up to 12 minutes straight, while giraffes like to entwine necks, and even fish touch lips, Kirshenbaum says. So while all of us seem to be programmed to know what to do, we pick up culture-specific techniques from movies and TV. Still, Kirshenbaum says, "There are definitely things people can learn to make it a better experience." Lay off the pressure - it produces the stress hormone Cortisol, a real buzz kill. "Getting to know someone fosters a bond and makes the likelihood of a kiss going well higher," she says.

"It probably depends on who you ask - it's culturally influenced," Kirshenbaum says. The famous Indian sex text the Kama Sutra advises going for the lips, of course, as well as the inside of the mouth, the breasts, the throat and most places on the face. Science also provides some clues: It turns out that a disproportionate amount of brain space is taken up with processing information from the lips compared to the rest of our bodies. "Just a light brush on them stimulates a very large part of the brain - an area even more expansive than would be activated by sexual stimulation below the belt," Kirshenbaum writes.

We've been kissing for ages—literally

"The earliest literary evidence we have for kissing dates back 3,500 years to India's Vedic Sanskrit texts, but given that we see so many similar behaviors in other species, humans have likely been connecting this way as long as we have been here on Earth," Kirshenbaum says. Though there's no way to say for sure why people do it, kissing may have evolved from the early human practice of pre-chewing food for babies, when moms would pass sustenance to their children with their lips. Pressure and stimulation of the lips releases feel-good hormones such as oxytocin, often called the love or bonding hormone, so we're primed from infancy to enjoy the sensation, whether it's from nursing or kissing, Kirshenbaum says.

Kissing seems "almost completely universal" among humans today, Kirshenbaum says. But it wasn't always so; she cites the work of anthropologist Helen Fisher, who's noted that certain South African tribes once "found kissing disgusting" and that it was previously "unknown" among people in parts of East Africa and South America. Still, non-kissing cultures did kissy things like lick, suck or blow on a lover's face before intercourse, Kirshenbaum writes. "Now kissing is exported and we're using mouthwash and toothpaste, so in some ways the experience is so much better than before it became a common custom," she says.

Eskimos don't actually rub noses, Kirshenbaum writes. But Canadian Inuits, as well as New Zealand's Maori people, do use their noses similarly to the way we use our lips: They sniff a loved one's face hard enough to suction the skin between their nose and upper lip. Though there isn't enough research to say whether this practice (or licking, sucking or blowing on a lover's face) produces the same feel-good chemicals as kissing, "It's fair to say that we're doing them for same reasons," Kirshenbaum says. "People seem to need to do [them] to connect with someone."

We always remember our First Kiss

If you're like most people, you remember your first kiss much better than losing your virginity, according to Butler University research. It's not clear why, but Kirshenbaum says it may relate to a kiss being our introduction to sexual behavior - and to all the important decisions that come with it. "I would expect it has to do with novelty and how much we engage all our senses in the behavior," she says. "A kiss really works as nature's litmus test. It tells us whether we decide to pursue a relationship."

It's all about first impressions

A bad first kiss can kill a would-be romance faster than you can reapply your lipstick. In a S.U.N.Y. Albany survey, 59 percent of men and 66 percent of women reported ending a relationship because the first kiss was off. The finding points to the way we unconsciously assess reproductive compatibility through a kiss, so a good kiss may signal a sizzling future under the sheets, Kirshenbaum says. Kissing releases chemicals associated with romantic and emotional bonding (oxytocin) and pleasure (dopamine). "A lot of people, especially men, judge how someone might perform later based on kissing," she says. "If you have that boost in oxytocin, those dopamine spikes, you can't wait to be with that person."

It's an essential ingredient for a long-lasting relationship

If you're looking for longevity with your honey, make time for kissing. Regular lip-locks signify a healthy relationship and perpetuate affection and attachment, Kirshenbaum says. Oxytocin, the same hormone that makes us bond to a new love also helps keep us attached. "Once the novelty wears off and romance wanes, it's that commitment that keeps a couple together, it keeps that loving feeling alive," Kirshenbaum says. "Kissing is such a good way of stimulating oxytocin and can really do the trick." Among long-term couples, kissing drops off over time, she adds, so make a point of including it in your day.

How we Smell matters

On a superficial level, our schnoz tells us whether we're dealing with Pig Pen or Old Spice Man. But it's also looking for clues about whether we're kissing a potential baby-making match - in the DNA department, opposites attract and our noses seem to discern genetic compatibility from a partner's natural scent. "Hygiene is important for everyone because it's the first indicator of whether this is worth pursuing or not," Kirshenbaum says. "Beyond that, scent seems to be an unconscious way someone's genetics and immunity are expressed." If you are worried that you're missing crucial info in your man's haze of aftershave (or that you're covering up your own with perfume), fear not, Kirshenbaum says: "If you spend enough time with someone, you'll notice their natural scent over time."

There may be something to women trying to make their lips look like Angelina Jolie's. A woman's lips begin to thin with age as her estrogen levels decline, so full lips could signal fertility, Kirshenbaum writes. But too much plump could backfire: "If they get too big or out of sync with the rest of your face, there's a chance of having the opposite effect." To avoid turning off the very people you want to attract, Kirshenbaum suggests playing up your natural assets with bright, red lipstick - the color is consistently rated the most alluring in research.

Kissing can be addictive—at Least initially

Ever kiss someone and can't get enough? Chalk it up to dopamine. This feel-good brain chemical kicks into high gear during a kiss, making us elated and even obsessed with our partner. While that feeling is similarto addiction, dopamine is more abundant in the early stages of a relationship, and declines as the novelty of our partner wears off. But because dopamine is more plentiful when we're with a new love, it may play a role in the addictive nature of adultery, Kirshenbaum says. "It can be part of the reason why some people stray: The novelty has such a big role in the feelings associated with [the affair]," she says.

Kissing while (mildly) intoxicated can up the passion

To drink or not to drink? On the one hand, drugs and alcohol stimulate some of the same brain chemicals as a kiss, so you could mistake your substance-induced high for passionate feelings about your partner, Kirshenbaum says. But, that said, if you're looking for something casual, kissing can be better after a drink or two (and alcohol can release your inhibitions, making a kiss more likely). "It can wind up feelings better or worse - it depends on how drugs affect your sense of reality," Kirshenbaum says. "Kissing acts as a drug on top of everything else, so when there's a lot riding on it, go with most accurate impression of what you feel," which is probably more obvious when you're sober.

Kissing can actually help you make up

Forget chocolate and flowers - just plant one on her lips. Though a woman may profess to be unmoved by a kiss from the man she's fighting with, research has found that a smooch (or a few) paves the path to forgiveness, Kirshenbaum writes. The effect may come from the oxytocin that's released during kissing. Kissing may reduce levels of Cortisol - the stress hormone - coursing through our bodies during a fight. "Reducing stress is a pretty good way to amend a fractured relationship," Kirshenbaum says.

Kissing never gets old — even when we do

While there hasn't been much study of kissing and longevity, there's reason to think that kissing is vital - and enjoyable -- throughout our lives, Kirshenbaum says. "Kissing is so important to long-term bonds," she says. "It helps to maintain a relationship." So she suspects kissing plays an important role from birth to death.