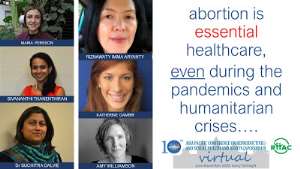 ...So goes an old common blessing given to an Indian bride, talks of gender equality notwithstanding. While the small family norm slogan of 'hum do, hamare do' (we two, ours two) has rubbed in well the penchant for begetting at least one son has not waned.

Many modern Indian women find their womanhood incomplete without begetting a son. I know of several highly educated and professionally qualified young Indian women who heaved a sigh of relief and smug satisfaction on having a boy as their first or second born. A complete Indian family is envisaged as one with two kids- at least one of who ought be a son.

This is what centuries of patriarchy entrenched in our society has done to our psyche, which even a Harvard degree is unable to wipe out. One shudders to think of the plight of the less privileged ones. No wonder India’s sex ratio at birth stands at 919 girls for every 1000 boys. While the Pre-conception and Prenatal Diagnostic Techniques (Prohibition of Sex Selection) Act prohibits sex-selection of the foetus, its enforcement is lax, resulting in high incidences of female foeticide in many states. Ironically, those very families who have no qualms about killing the female foetus, revel in worshipping female deities with great pomp and show.

Having access to reproductive justice that entails "the human right to maintain personal bodily autonomy, have children, not have children, and parent the children in safe and sustainable communities" is a far cry for most women, not only in India but in many countries of the Asia Pacific region.

The term reproductive justice was coined and formulated as an organizing framework by a group of Black women in Chicago in 1994, just ahead of the International Conference on Population and Development (ICPD) in Cairo.

A fiery and enlightened panel of women activists aired their views on these issues during a recent online session of the 10th Asia Pacific Conference on Reproductive and Sexual Health and Rights (APCRSHR10), focussing on safe abortion in the region.

Mortality due to unsafe abortions still remains high at 13% of all maternal deaths in South East and South Asia. Abortion is illegal in 3 Asian countries- Iraq, Laos and Philippines. 17 countries allow abortion without restrictions and others allow it only under certain conditions. But even in countries like Cambodia, India and Nepal, that have liberal abortion laws, many women continue to face a host of barriers to obtaining safe, legal procedures. In Thailand, despite access to safe abortion services and contraceptives, teenage pregnancy remains a challenge. Stigma, coupled with lack of information, makes these services more inaccessible to unmarried women.

Sivananthi Thanenthiran, Executive Director, ARROW (Asian-Pacific Resource and Research Centre for Women), blames it upon the growing influence of religious fundamentalism and its anti-gender ideology with the rise in right wing governments.

"Extremist ideologies thrive on asserting control over women’s bodies, autonomy, sexuality and their daily lives. This confluence of conservative religious, cultural and customary practices is often interlinked with the pursuit of power. Criminalisation of abortion is a tool of patriarchy and structural racism. Safe abortion for women is not just about choice, but also about access. Governments should eliminate all legal barriers that limit women's access to sexual and reproductive health services, commodities and information, including access to safe abortion. Generating evidence based data on abortion and related issues through a rights-based analytical framework is essential to influence policy and strengthen advocacy and accountability", she asserts.

Dr Suchitra Dalvie, co-founder and Coordinator of the Asia Safe Abortion Partnership, roots for recognizing the political significance of safe self-managed abortions that governments should make available to pregnant women as a valid and safe choice, and not in situations where they are forced to do it underground. According to her, a pregnant woman should have enough accurate information to be able to self-assess her pregnancy, self-procure the pills and self-conduct the process of abortion in a location of her choice without having to visit a medical facility. She should also be able to access a healthcare provider if need be at any stage of the process.

Self-administered medical abortion has been proposed as a strategy to reduce burden on the health systems and to provide convenience for women. And there is data to support the safety of such self managed abortions.

A systematic review of 18 randomized controlled trials and prospective cohort studies from 10 countries, including India, Bangladesh, Nepal, Vietnam and China, shows that self-administered medical abortion is as safe and effective as the one that is administered by a healthcare provider. So, women can effectively and safely induce their own early medical abortion through self-administration and may not require full supervision of a provider during any stage of the drug regimen.

Presenting these findings Katherine Gambir, Research Advisor at Women’s Refugee Commission, said that, “Policy makers at global and national levels should consider amending medical abortion guidelines to offer women the choice to self administer early medical abortion procedures with or without clinical guidance, thereby alleviating the burden on overburdened healthcare systems. This is especially important in the context of COVID-19 when health systems are strained and access to clinic-based care is restricted. Also we are seeing an increase in gender based violence including intimate partner violence, which emphasises the urgency to ensure that women have access to sexual and reproductive healthcare and contraceptives, including emergency contraceptives and self-administered medical abortion”.

Favourable legal environments are the first step in providing comprehensive abortion care by healthcare providers even in humanitarian settings, where women and girls face increased risk of unsafe abortions arising out of various forms of sexual and gender based violence and resulting in maternal mortality and morbidity. Comprehensive abortion care includes menstrual regulation - a procedure to regulate the menstrual cycle to ensure a non-pregnancy; post-abortion care; and contraceptive provision and counselling.

Maria Persson, Sexual and Reproductive Health Expert at Ipas Bangladesh (who was a Research Assistant at Karolinska Institutet when the study was conducted), shared the example of comprehensive abortion care provision in Cox's Bazar in Bangladesh, which is home to more than 900,000 Rohingya refugees displaced from Myanmar. The Bangladesh government, with help from civil society organisations, leads this humanitarian response, through healthcare facilities that provide free abortion care services.

Induced abortion in Bangladesh is illegal, unless the woman’s life is in danger. But menstrual regulation (a simple and inexpensive procedure that uses manual vacuum aspiration to make it impossible to be pregnant after missing a period) is legally permitted up to 10 weeks of gestation and is widely practised in healthcare facilities. Also a combination of mifepristone and misoprotol for medical abortion has been legalised since 2012.

Persson said that the legalisation of menstrual regulation coupled with collaboration between civil society organisations and the government has made provision of comprehensive abortion care possible in Cox's Bazar. Integrating the full package of comprehensive abortion care services in the primary healthcare system to address women's multiple sexual and reproductive health needs, training on menstrual regulation policy and abortion law and in-service training can ensure provision of quality care that is woman-centred and non-judgmental.

Indonesia- a Muslim nation- is another country where abortion is legally permissible only in medical indications, severe congenital defects and rape cases. The government’s family planning programme is only for married couples and contraceptives for unmarried women are not available.

Abortion is generally stigmatized and there is a sensitivity for using the word even in health facilities. Sharing this information, Riznawaty Imma Aryanty, Reproductive Health programme specialist at the United Nations Population Fund (UNFPA) Indonesia, made a case for having proper comprehensive sexual education for adolescents.

“It is also very important to have data on abortion and abortion-related complications. For example, if there are so many abortion complications, it would be an indication of unsafe abortion practices and force policymakers to do something about it. So we have to bring more data to the discussion table, and interpret it in an understanding manner to improve the situation”, she says.

While Indonesia’s interpretation of Islam is fairly liberal, yet its understanding of abortion is far more restrictive. Riznawaty sees the need of enlisting the support of moderate religious leaders and raising their voices to advance the cause of sexual and reproductive health and rights for women.

Agrees Amy Williamson, Country Director, Marie Stopes International, Cambodia, who was also the Chair of the eighth session of APCRSHR10: restrictive access to abortion is tied up in outdated laws and policies and the current pandemic has only made it more urgent that these policies are changed to prevent an increase in unintended pregnancies, births and unsafe abortions. It is more important now than ever that abortion is recognised by governments and within health systems as essential healthcare. We need to take the stigma out of it and make it comfortable for everyone to speak about it, especially the young.

Yes, we need safe abortion services for everyone. But, as someone remarked, our long term goal - which should be achieved as soon as possible - must be to ensure every pregnancy is wanted and no unintended pregnancy is conceived at all. This can happen only if women and men can access and use options to prevent them. The wall of hegemonic control that patriarchy wields on women's sexual and reproductive lives has to be demolished.