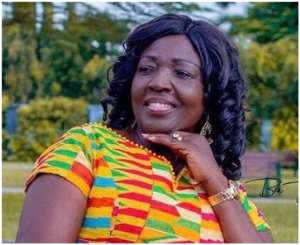 The President & leadership of the Association of Concerned Ghanaians in Europe(ACGIE) for Human Rights, Democratic Governance and Peace Initiatives for Africa bestow to Mrs. Eleanor Effe Amanor aka Mama Effe Distinguished Service To Humanity Award.

Women, in general, are the newborn child's primary caregivers in most societies. The paid nanny, the indulgent grandmother or an older sister are most likely to watch over the child during its first three critical years. From the womb through its early formative years the baby has more direct contact with women. It is during this time that the words, unspoken messages and expectations of the caregiving woman affect and determine the child's future destiny most. A physically abused and psychologically hurt child at this time is likely to project his or her anger on society in later life. On the other hand, a child that is surrounded by the warm embrace of loving women caregivers will most likely spread that love in his or her future dealings with others as the child grows up. Perhaps the truthfulness of this saying is best exemplified in the life of George Washington (1732-1799), the first President of the United States, who said this about his mother: "All I am I owe to my mother...I attribute all my success in life to the moral, intellectual and physical education I received from her."

Mama Effe joined Luv 99.5 FM of the Multi-Media Group in Kumasi as a program in family and relationships in 1997. She upgraded her role into Support for Orphans and Widows and currently runs the program Obra @ 1pm, which has its contents in social, marital/relationship (with a strong base in child support), orphans and widows support.

She has received Multiple Awards globally and has endeared herself and her team to wide listening public during her show.

Host of Obra on Nhyira FM in Kumasi, Eleanor Effe Amanor, has received honours from institutions in three European countries (France, Germany and Holland) for distinguished service to humanity.

Her skills in solving all manner of problems, from child neglect, lost and found parents, abuse in relationships issues is just excellent.

Mama Effe has style, expect management of anything and everything about relationship and very philanthropic. Eleanor just gives all of herself into her program, among these activities which are done all year round are:

A great thanks to DJ Amofa, one of the best DJ’s in Europe who monitored the jury.

Signed
Frederick A. ADDO
The President
Association of Concerned Ghanaians in Europe (ACGIE) for Human Rights, Democratic Governance and Peace Initiatives for Africa