Are We Forgetting That TB Prevention Is Better Than Cure? 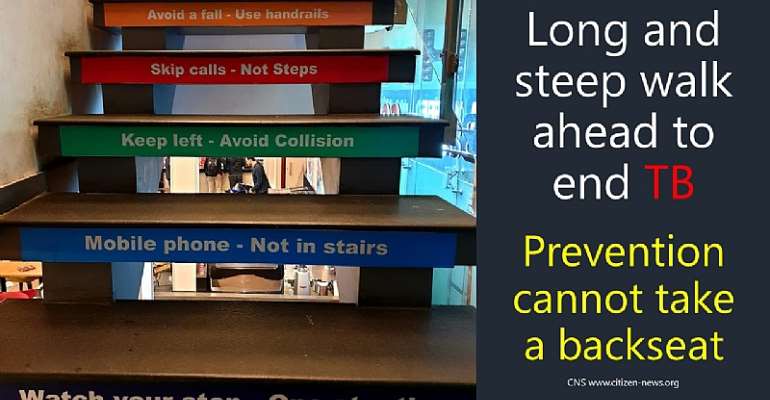 Prevention of new infections of TB bacteria (Mycobacterium tuberculosis) and their progression to active TB disease is critical to reduce the burden of TB disease and to achieve the goal of ending TB by 2030.

The political declaration at the first ever UN high-level meeting on TB in September 2018 included a target to provide TB preventive treatment to at least 30 million people during 2018–2022: 6 million people living with HIV, 4 million children below 5 years of age who are household contacts of people with active TB, and 20 million other household contacts, with a view to empty this pool of latent TB.

LATENT TB MANAGEMENT India has the highest TB burden: 27% of the global TB burden. 40% of its population (400 million people) is infected with LTBI. 10% of them (40 million) are likely to develop active TB disease in their lifetime.

Dr Rohit Sarin, Director of the National Institute of Tuberculosis and Respiratory Diseases, India, and member of Technical Working Group of government of India on LTBI, agrees that to prevent incidence of active TB disease, we have to cut down TB transmission to reduce the latent TB pool. Probably the best way to do this is to diagnose a TB patient early on and to put the patient on effective treatment so that the patient is no longer infectious and will no longer transmit, he told CNS (Citizen News Service).

But managing latent TB infection in such a large population (400 million) is no easy task. So perhaps it becomes more pertinent to identify the groups which have a greater chance of breaking into active disease and then give them preventive treatment. But before we treat for LTBI we have to rule out active TB in these persons.

TEST AND TREAT Dr Sarin shared that “The latest RNTCP guidelines for latent TB management have the test and treat strategy. But the recommendation is to treat without testing in certain groups. These are children below 5 years of age who are contacts of a TB patient and people who are living with HIV. In other groups, which include inmates of jails, people in congregate settings and in old age homes, healthcare workers, people on chronic immunosuppressive therapy, we need to first test for LTBI and in case the person is infected we start that person on treatment”.

The tests available in India are the tuberculin skin test or the Interferon Gamma Release Assay (IGRA), which is a blood test. The current treatment in the public health programme for LTBI management is daily dose of isoniazid for six months. However the country is also considering newer TB preventive treatment options, such as, a once weekly, 12 week regimen of Isoniazid and Refapentine. As a clinician one can give any of these therapies but from programmatic point of view it has to be operationally feasible for a large population, said Dr Sarin.

Dr Surya Kant said that if we cannot beat the TB bacteria, we can at least make ourselves fitter to fight it. He said that we cannot blame the TB bacteria alone for LTBI. Host immunity is also responsible for it. It is not just about the presence of the bacteria inside the body but also how the body deals with it. Active TB disease results when the body’s resistance mechanism is unable to counteract the bacillary load.

Dr Surya Kant's advice is to focus more on developing the immunity of the contacts of TB patients.

How do we do that? While conceding that all contacts should be tested for LTBI, he stressed upon the urgent need of awareness campaigns in targeted groups for all contacts of TB patients to take proper nutrition, not smoke or consume alcohol, maintain proper blood sugar levels, do physical activity, meditate to reduce stress and maintain proper hygiene. These are all proven preventive measures to prevent LTBI from progressing to active TB and should be an integral part of TB care and control, rather than providing just TB preventive treatment. Malnutrition is the bane of TB and LTBI control, and so nutritional support must be provided not only to TB patients, but also to their contacts, he said.

LATENT TB MANAGEMENT IN INDONESIA Indonesia harbours the third highest burden of TB (6%) globally. Also an estimated 85 million of the Indonesian population is infected by latent TB. Dr Erlina Burhan, Head of TB DOTS and MDR-TB at Persahabatan Hospital, Indonesia, and member of Board of Directors of International Union Against Tuberculosis and Lung Disease (The Union) told CNS that: "If Indonesia would like to have TB elimination by 2030, we cannot be just working at the end (treating active TB) but we have to prevent TB by finding people with LTBI - through contact investigation, screening at the community level, screening in high risk groups - and give them TB preventive treatment to prevent LTBI from developing into active TB disease. But as it is difficult to treat 85 million people, right now the government is prioritizing high risk groups such as children under 5 years of age and people living with HIV for TB preventive treatment. But as a clinician, I feel that we need to expand beyond these two groups and also target other risk groups to be screened and treated for LTBI."

Dr Erlina shared that in Indonesia's public health programme the Mantoux tuberculin skin test is being used. Even though, the QuantiFERON - an interferon-gamma release assay (IGRA) test- is a better diagnostic test, it is very costly. So the government is discussing the use of IGRA in future, provided the company reduces its cost.

As for TB preventive treatment, currently a 6 month daily regimen of isoniazid is offered in the government programme. But another 12-dose regimen 3HP (once weekly doses of two drugs- isoniazid and rifapentine for 3 months) could soon become a reality in Indonesia.

Achieving the targets of an 80% reduction in TB incidence from the 2015 level by 2030, would require a 17% annual rate of decline in TB incidence. This in turn will require substantial reductions in the progression from LTBI to active TB disease. Healthcare interventions that could help to cut the risk of progression from LTBI to active TB disease include new diagnostic tests that are better at predicting who is at risk of progression to active TB disease; more effective drug treatments for people with LTBI; and action on the broader enablers of TB, which include improved nutrition, proper housing, better ventilation for fresh air and sunshine, improve sanitation and better infection control.