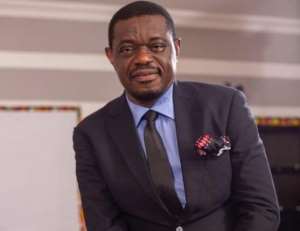 Questions still linger about the death of actor, Ekow Blankson as many movie industry players and his followers have been asking about what caused his sudden demise.

His family is also yet to issue a public statement on the sad incident.

On Wednesday Ekow's childhood friend called, George Nartey who spoke on Hitz Fm was also not sure of what killed him.

According to him, Ekow told him that he had cardio issues but he could not confirm what led to his death.

He said he was yet to find out from his family.

“He was admitted to the hospital briefly, I think on the 8th or 9th of September …..then he got better.

Last week Wednesday I met him, we spoke… I didn’t see him on Thursday, I didn’t see him again on Friday. I didn’t bother to call him because his wife was also not very well so I didn’t call him. I just wanted him to have time for his wife. On Saturday I sent him a voice note oh my brother I haven’t seen you for a while, and he was like he was not well he has been at the hospital. I asked what's wrong with him, he said a few cardio issues,” he revealed.

“I said ok get better, so please make sure you feel better because we have something to do on Tuesday. He was like even if I am not there you can do it. I was like no way you are leading the whole thing so get better so we do it. Then he said it again oh George if even I am not there you can do it. I didn’t take it seriously, so I just left it. Then on Sunday night, he sent me a text and some pictures that he is being readmitted to the hospital. I said wow what’s wrong with you? He said they are doing a few checks. Then around 10:48 pm exactly he sent me a list of contacts that I need to call for a written dummy and I have to coordinate issues here and there. I was a bit surprised so all I said was let's speak tomorrow morning and that was it,” George added.

Ekow reportedly died early Monday morning at an unnamed hospital in Tema. The cause of death is yet to be made public.

He was a great actor known for his excellent performance in movies such as 'The Intruder', 'Diary of the Black Hustler', 'The Saga', 'Total Exchange', 'A Woman's Desire', In April, Checkmate and 'Frozen Emotion' etc.

His death has come as a shock to Ghanaians and many industry players, mostly those who were on set with him within the week of his demise. A lot of them have sent their condolences to his family.

His friend George Nartey said he is devastated to hear his friend is gone. According to him, Ekow had plans and he was a motivator.

2023 budget: Expenditure cuts are just a recycle of broken p...
49 minutes ago