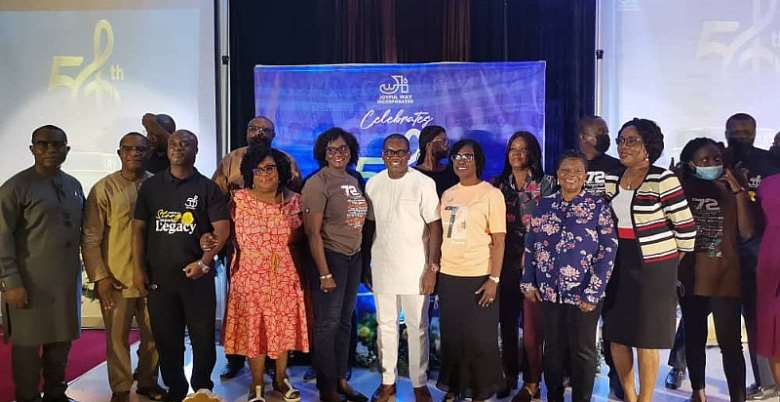 Formerly known as Joyful Way Singers, the ministry was born five decades ago in Cape Coast, when some teenage students came together to form a group to propagate the goodness of the Lord through singing.

After several decades, the Ministry which has gone through various phases has footprints not only across Ghana but all over the world.

At a media launch of the 50th anniversary of the ministry held at the Best Western Premier Hotel on Wednesday, January 26, 2022, Chairman of the Board of Directors of Joyful Way Incorporated, Mr. Samuel Ewool stressed that the group is very grateful to God for bringing it thus far to make the impact it continues to make.

He emphasised, “We are therefore happy to announce that our Jubilee celebration will be under the theme: JOYFUL WAY AT 50 – OUR STORY, IMPACT AND LEGACY.”

He noted that following the launch, there will be an array of activities and programs throughout the year to mark the 50th Anniversary.

Enumerating the activities, Mr. Samuel Ewool disclosed that there will be internal and external conferences and discussions on issues that border on gospel music ministry both in person and on radio and TV.

“There will be school concerts and crusades. There will be the launch of our history book, songbook and video documentaries. There will also be the launch of our 50th Anniversary Music Album. We shall also commission our legacy Projects. We will close the year with a Thanksgiving and Fundraising Dinner, a Thanksgiving Service and our flagship Explosion of Joy Concert on the 26th of December 2022,” the Chairman of the Board of Directors of Joyful Way Incorporated revealed.

Besides the Joy Concert scheduled in Accra, there will also be two additional concerts held in Kumasi and Cape Coast dubbed ‘Joy Over 1’ and ‘Ofata Ayeyi’ respectively.

According to Mr. Samuel Ewool, Joyful Way Incorporated is keen on staying focused on its core mission of propagating the gospel through music evangelism, impacting several youth and nurturing them into becoming responsible citizens.

It all began around October 1971 with a thought that was deeply impressed on the heart of Rev Prof Emmanuel Lartey to form a contemporary gospel music group, while he was praying in the Lower Dormitory Prefects room of Balmer-Acquaah House in Mfantsipim School.

The Core Mandate of the group is to proclaim the gospel of salvation through the redemptive work of our Lord Jesus Christ and to encourage revivals among Christians.

Guided by a single-minded mission to proclaim the gospel of salvation through the redemptive work of our Lord Jesus Christ, the Group used and continues to use contemporary music as its major tool of evangelism.

It has branches in Cape Coast (UCC, Mfantsipim, Ghana National), Kumasi (KNUST), and its headquarters called the House of Joy at Mataheko, Accra

Over the years, the Group has travelled the length and breadth of Ghana, visiting several Senior High Schools, churches and villages preaching Christ and Him crucified. The Group has also ministered in the West African sub-region, Europe and the USA.

Joyful Way has over the past 50 years produced 15 albums with over 120 songs recorded on these albums.