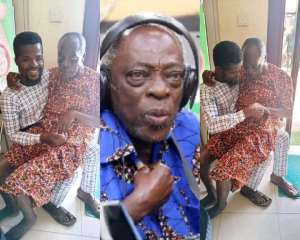 The actor who for some weeks was battling with stroke and was receiving treatment in Accra passed on at his residence in the late hours of yesterday, Thursday, September 16, 2021, according to his daughter Comfort Laing.

A picture of him in ill health circulated a few days ago and in an interview on Oman Channel, he pleaded with Ghanaians to come to his aid.

He will be remembered for his hilarious character in the famous Akan Drama series alongside the late Super OD, Ice Kenkey, SK Oppong amongst others, and the evergreen colonial series 'District Colonial Court' in which he held the Ghanaian audience to his deceptive English interpretation.

He started his acting career in 1971 and featured in a few local movies too.