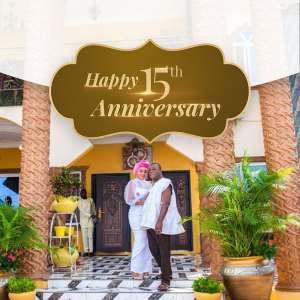 It seems as though it was just yesterday that the talk-of-town wedding between Lord Commey, the then National Organiser of the New Patriotic Party (NPP) and his heartbeat, Anita, became the subject of newspaper headlines but it has been some 15 solid years.

Wednesday January 22, marked the 15th wedding anniversary between Lord Commey, now the Director of Operations at the Presidency and Anita; in a sweet union that has given them three lovely daughters; Naa, KK and Eliena.

Commey was reported to be on official assignment outside the country as at Wednesday and the couple have therefore planned an anniversary celebration scheduled for end of month.

Congratulatory messages from far and near have however not stopped pouring in since Wednesday.

In as much as the Commey’s have tried to keep Anita away from the public eye, she is reported to be a Canadian-trained beauty therapist who owns a chain of high-end luxury saloons in the country’s capital.

Deep throats have described her as a very prayerful person as well.

It is said that a marriage anniversary is the celebration of love, trust, partnership, tolerance and tenacity. The New Publisher wish the couple a very happy and prosperous marriage.