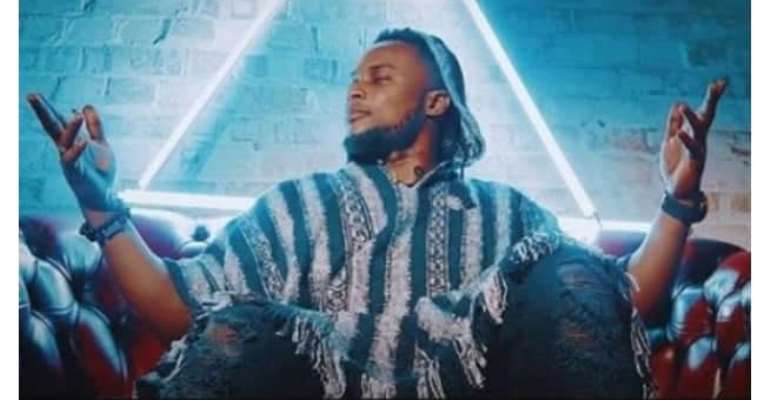 Social media users are confused concerning the latest music video of one of the finest Ghanaian Gospel Musicians Joseph Matthew aka JM.

Some have already jumped into conclusion that he is a member of the secret society judging from the concept of the video.

JM is a UK-based Ghanaian Afro gospel artist with a distinctive contemporary sound— a mixture of Ghanaian highlife, contemporary Afro beats and Rap.

Born into a Christian musical family in Tema, Joseph quickly learnt to play various musical instruments from a tender age and sang in the church choir which was led and directed by his father. He then went on to play in the church band where he had the opportunity to develop his skills further and realised his vocal gifts

In his early teenage years, JM had developed into a unique rapper, singer, and a songwriter who gained immense attention of many. As a result, he has performed and worked alongside many artists from different genres including hip hop, RnB, Afro beats, reggae and gospel due to the versatility of his style.

He is known for songs such as ‘Hallelujah and ’Nyame Ye’ .“Nyame Ye’, which literally means ‘God Is Good in the Akan dialect, is his latest song that talks about the essence of thanking God for overcoming obstacles and hard times.

There is one untold story about the “Nyame Ye” music video that proves he is a fan or truly a member of the Illuminati society. Illuminati refers to several groups of both real and fictitious secret society perceived to be controlling events in the world. They are believed to possess the deep secrets to acquire wealth, fame and influence.

In the video, JM injected the Pyramid Symbol. In the Illuminati society, the Pyramid is an essential symbol that depicts: wealth, success and power .In the quest to become famous, many musicians have made a habit of injecting Illuminati symbolism into their videos in hopes of getting a viral lift.

Astonishingly, browngh.com is reliably informed that the concept behind the video was not just to create controversy–but to hype and promote the secrete society.

Oh yes,JM’s Nyame Ye’ video and song was mainly shot and composed to hype and promote the Illuminati society– but not to praise our heavenly father. The “Nyame Ye” hitmaker is nothing but a fake gospel musician who is being used by satanic groups to win souls for them.

Browngh.com is daring him to come out and open up to Ghanaians if he thinks he isn’t a fan or a member of the illuminati society, and stop composing fake gospel tunes to cover up the truth.