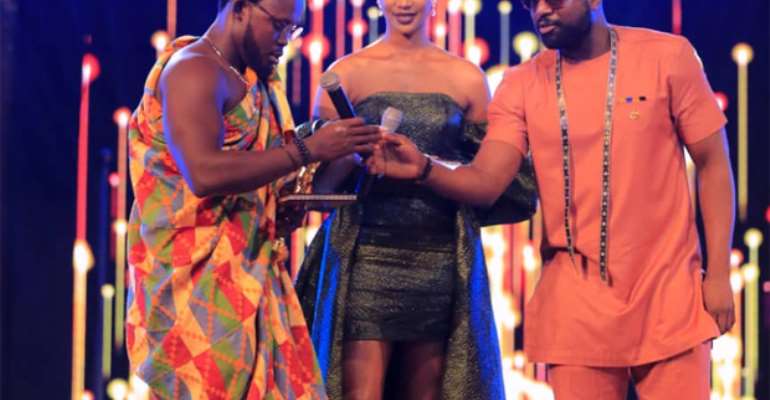 Statuettes were handed out at the ninth Ghana Movie Awards (GMA) on Saturday night at the National Theatre in Accra.

Actress Salma Mumin made history as she beat some of her senior colleagues to win her first best actress in the lead role award. She beat the likes of Jackie Appiah, Yvonne Nelson, Lydia Forson, Selassie Ibrahim, Roselyn Ngissah, Nadia Buari and others.

The surprise winner of the best picture category was 'Gold Coast Lounge', which is set to premiere January 2020.

Funny Face and Nana Ama McBrown were adjudged favourite actor and actress respectively, while Florence Adjei won discovery of the year with her role in 'Adoma'.

The best actor and actress African collaboration also went to Mike Ezuruonye for the movie 'Tender Lies' and Rosie Meurer for her role in Yvonne Nelson’s film, 'Sin City'.

The annual award recognises excellence in the Ghana's movie industry.

Saturday's award ceremony was attended by a number of showbiz personalities like Prince David Osei, Bismark The Joke, Jeffrey Nortey, and a host of others.

The Chief Executive Officer (CEO) of Rigworld Group, an oil services business with operations across West Africa, Kofi Amoa-Abban, has pledged $10,000 towards setting up a Ghana Movie Awards Fund (GMAF), an initiative by the organisers of the award.

“For their contribution in shaping and promoting Ghanaian culture through the powerful medium of movies over the years, there is a dire need for a fund to support their welfare in their old age, hence GMAF,” Fred Nuamah, the CEO of Ghana Movie Awards Foundation (GMAF), said.

The Ghanaian oil and gas entrepreneur and philanthropist made the pledge in a meeting organised by GMAF and attended by some of veteran actors like Doris Okang, Kojo Dadson, Fred Amugi and Paa George.

Operations and structure of the GMAF would be announced in the first quarter of 2020 when GMAF plans to launch the 10th anniversary of the GMA scheduled for December 2020.

Don't succumb to pressure to support LGBTQI agenda – GMM to ...
31 minutes ago