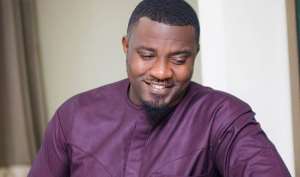 Actor and politician John Dumelo has responded to Counselor Lutterodt's call on him to take more wives.

The counsellor had said in an interview with blogger Zionfelix that polygamy is not a sin in the Christian doctrine, adding that rich and influential men like musician Sarkodie and John Dumelo, should marry two or more wives.

He added that there are many single ladies, especially female celebrities out there who deserve to have husbands too.

Speaking to Jessica Opare-Saforo on Citi FM's Traffic Avenue, John Dumelo said that there is nothing wrong with polygamy.

According to him, even though he would not practice it, he thinks those who want to have more wives are at liberty to do that.

“Personally, I don't believe in it [polygamy] but I feel that there is nothing wrong with it. If the Muslims are doing it perfectly, why not Christians? Provided you can take care of your two or three wives, that's fine. I speak to a lot of Muslims and both the men and women are okay with it,” he said.

He also added that “…I feel it [polygamy] is good for Ghana.”

When asked if the reverse of having women marry more than one husband was also good, he said “you can't just do it for men. Do it for women as well.”

John, however, added that “naturally men are like that but women are not like that so you would find fewer women in that situation.

John Dumelo, who is seeking to be elected as the Member of Parliament for the Ayawaso West Wuogon Constituency is married with a child.

Polygamy is the practice of marrying multiple spouses. When a man is married to more than one wife at a time, sociologists call this polygyny.

When a woman is married to more than one husband at a time, it is called polyandry. If a marriage includes multiple husbands and wives, it can be called a group marriage.

Is polygamy legal in Ghana?

Polygamy is illegal in Ghana, although laws against this lifestyle are not heavily enforced against those who choose to live it. Polygamous marriages are illegal under civil law.

However, they are arguably considered to be legal under Customary Law and Islamic Marriage.

Galamsey: We have to win the fight to protect our heritage -...
2 hours ago