A Bus Ride; Chronicles Of Shatta Wale And Giovani Caleb On The 3fmDrive 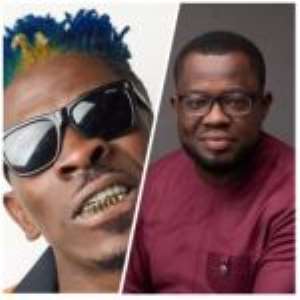 On a sunny Tuesday Afternoon with my radio set locked on the 3fmDrive with Giovani the Award winning radio host, I was enjoying a smooth ride with his amazing DJ Faculty dishing out some great tunes, back to back, then came in Ghana's Dancehall giant Charles Nii Armah Mensah popularly known as Shatta Wale.

Currently layout with an Album titled "Wonder Boy", the jovial but serious Shatta Wale went straight into answering questions by Giovani Caleb as part of business for the day.

Addressing issues in a somewhat playful manner amidst shouts from his fans,who had traveled from some parts of Accra and Western Region to catch a glimpse of their Dancehall Commando,Shatta Wale touched on the reasons for his act, and described it as a movie with titles Shatta Wale part 1,2,3 ,4 and counting he laughed out loud.

"Truth be told I am real, putting up such acts for my fans informs their lives positively and When I create beef I usually do not expect my colleague's in the music industry to take it personal yet they do and end up attacking my fans" which I don't subscribe to because the fan has to be respected. Shatta Wale Voiced out.

For about ten minutes. My bus ride with these two hilarious gentlemen was full of exciting conversations on how the "Wonder Boy" album is doing on the music market globally after its successful launch? This album Shatta explains is a birthday gift for the Shatta Movement Fans.

It's Receiving positive feedback and tweets from fans gives me absolute joy, gradually each song is beginning to fall on the heart of my fans. The Album is a GOSPEL Album you know, Shatta Wale tells Giovani Caleb displaying all seriousness.

Explaining why most of his recorded songs did not make it on the "Wonder Boy" Album he said some of the songs chased him in his sleep and kept ringing in his ears constantly thus the feature. Giovani Caleb and Shatta Wale cracked listeners up with jokes of the songs chasing up and down to be released.

The bus ride with these two finally touched down on artists respecting their fans, for the fans can make and unmake an artist.

"I believe they are the reason why we survive in this industry and the more reason why I make sure I pay my dues or small tithes anytime I hit the streets of Accra , more so without them attending our shows we don't get paid" , Giovani Abi You dey Understand Shatta Wale explained saluting his Shatta Movement Fans.

Wrapping up on what I described as the realest conversation, the chit chat couldn't have come to an end without Giovani Caleb asking few questions on the lion king Album feature, the impact and the fact that it had been nominated for BET awards.

For any of Shatta Wale's songs, especially the ones on the Wonder Boy Album visit his digital music platforms on iTunes, Aftown and many more.