Private Screening Of “Lucky” Ahead Of September 7 Premiere 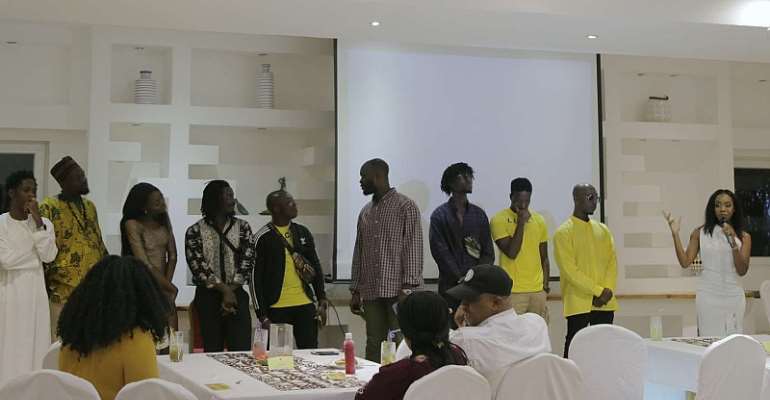 Don't wait to be told, grab a ticket and be at the Silver Bird Cinemas to watch the movie "Lucky" on September 7, 2018. There's a reason why September 7 should be an exciting day; and it gets even better if you are a movie freak.

Finally, the much-anticipated Ghanaian movie titled “Lucky” gets to be premiered at the Silver Bird Cinema and at the West Hills Mall.

This is a movie that has taken over a year to shoot, and the final piece is one that encapsulates detail, real-life scenarios, suspense and comedy, in equal measure.

At the private premiere of the movie on Saturday, the audience could not help but applaud and appreciate the efforts of the team throughout.

Produced by Lawrence Adjei and Directed by Togbe Gavua, “Lucky” is a film that gives a perfect picture of today's University student and his or her challenges in combining education and adventure.

The storyline is themed a young University student called Lucky Barima Mensah whose quest to woo a lady he met on Twitter pushes him to do all sorts of untoward things.

Now, would you ever sell your laptop in order to go out on a date with a lady, to the detriment of paying your hostel bills? You better not ask me which character did such a “stupid” thing because the answer is right there in the movie “Lucky”.

There is also the erratic character Wadaada who could virtually sell anything once it is able to attract a buyer. When I say anything, I mean anything, including his toothbrush and boxer shorts.

With a character like Wadaada as Lucky's best friend, what sort of advice would he give him?

And, how would Efya (yes the singer) perform as an actress playing the role of a Twitter slay queen?

If that is not enough, imagine Fred Amugi being a pastor or Sam Ajetefio (TT) ending up in a cell despite all his skills as a taxi driver.

This is not about hype. The move “Lucky” is an amazing piece of work from Abstrakte Productions and you simply cannot miss the premier on September 7.

Aside the comic bit of the film, it also tackles some of the dominant stereotypes in society which we need to get rid of.

It explores the lifestyles of some University students and the role parents play in shaping the lives and futures of their wards.

You may have been unlucky to have missed the private premiere on Saturday at the La Villa Boutique Hotel in Osu, but you will have no excuse should you miss the official premier.

Everyone at the private premier could not help but commend the entire team (a very young cast for that matter) for putting up such a masterpiece.

The audience were also thrilled to some comedic scenes in the movie, although the storyline was themed on real-life scenarios.

So if you are a movie freak, there is no better place to be on September 7 than at the Silver Bird Cinemas or the West Hills Mall to watch the premier of “Lucky”.

Even after watching the private premier, I am itching to watch it again. You can grab your tickets at Batsoona filling station, Koala, Joy FM offices and other regular ticket outlets.

Don't wait to be told, grab a ticket and be there to watch this amazing movie that has been trending in recent weeks.

Mind you, “Lucky” will not only be premiered in Ghana, the movie is also set to be premiered in Nigeria and South Africa later this year. That alone should tell you how marvellous this production is.

Once again, the date is September 7. Be there!!