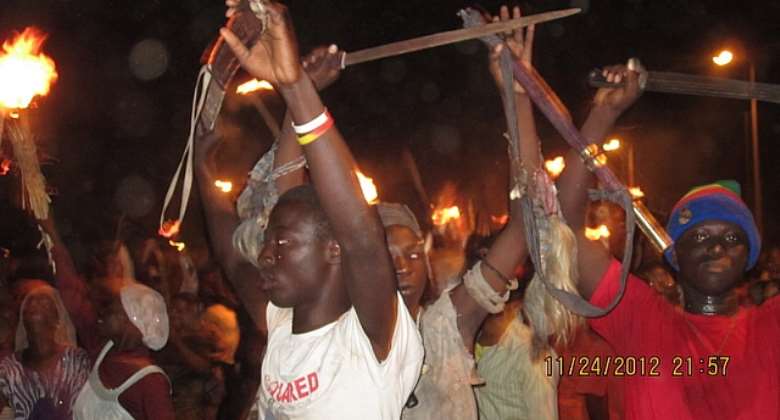 Over the weekend the people of the Northern Region celebrated the fire festival locally known in Dagbani as BUGUM festival. The festival is one of the main festivals celebrated by the people of the region. It is believed that the origin can be traced to Noah and the Ark. It is believed that during the great flood as recorded in the Quran and the Bible, Noah's Ark settled somewhere. When they got out it was dark. They therefore lit cotton wool to give light. After the dispersion , the people of Tamale celebrate the fire festival to recall that event. The festival is celebrated in the night. It commences with the chief praying and litting the first fire. Other people light theirs from this fire. The people do not use cotton wool anymore because of the cost; they use dried rolled-up straws. Adults and children alike chant war songs while raising their straws high in the air. They head towards a particular site where they dump these straws. They then pick up branches and leaves and head back to town where they jubilate by singing and displaying fireworks.

It is also believed that the origin of the story is from when a prominent prince went missing. His father, the chief, asked the people to go in search of his son when it was evening and his son had still not returned. The Chief Priest mixed some herbs and the search party used it to bath for protection. The people went with lit up straws into the forest and found the boy asleep under a particular kind of tree. The people returned jubilating to have found their future king safe and sound. The people of Tamale therefore celebrate the fire festival to mark this historical occasion in their lives as a people. During the festival, prayers are offered to the gods for bountiful harvest in the coming year. Men also display their prowess by drinking 'walegu' the said concoction and also using it to bath. They believe this will prevent them from being killed when shot at or when cut with a cutlass.

It was a merrymaking occasion over the weekend. Tamale and its suburbs were fun till daybreak.