Pogka Dela Set to be released on Thursday the 5th of November 2015. 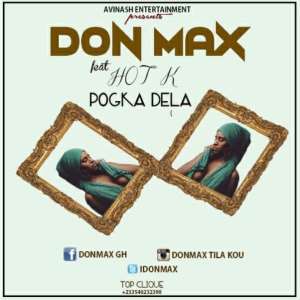 Don Max and Hot K of Avinash Entertainment is back again with yet another hit "Pogka Dela!" (Woman is!) This will be hitting the waves this coming Thursday. The two super stars of the Bolgatanga Music Industry said it was management decision that they should come up with a master piece together which will be a trade mark for the general public. Don Max and Hot K of Avinash Entertainment came up with the concept of "Pogka Dela!" (Woman is!). The concept was deliberated by the board of Avinash Entertainment to the extent possible. "Pogka Dela!" talks about the modern girls trying to be smarter than guys of today’s world. Hot K who is taking the chorus tries to explained that he is a bad man because he has studied girls to the extent that, he has come to realized that "Pogka Dela Bun Sela" (Woman is a snake). His Chorus go's this way. "em dey call me bad man, ti pogka dela bun sela fair em". Hot K tries to be more realistic with his chorus and narrowing his chorus down to a two line chorus, but it stills has a phrase that explain how women are and that is "Pogka Dela Bun Sela Fair Em". Once you understand how a snake is, basically you will understand what he is trying to portrait about women. Don Max Started his hook by saying "Pug’to bote la money" meaning Girls want money moving down to "Bura with more flex" meaning a guy with more flex. Don Max also tries to talk about what girls want in life. Just like YCD Lyrix said in his music entitled "Pugla waa kinsa". "Girls says they have to make money and the only thing papa God bless them is their body". Don Max said girls will always do you go come go come and they will not come back like Castro and this kind of behavior makes his love come die like Asambo (Local Guitarist who die over one night). Pogka Dela is set to be released on Thursday 5th of November 2015. Don Max singing “Tila Kor” and Hot K “Yaaho Yaaho”.

My Heart Bleeds For Health Workers – Sammy Gyamfi React To H...
5 hours ago