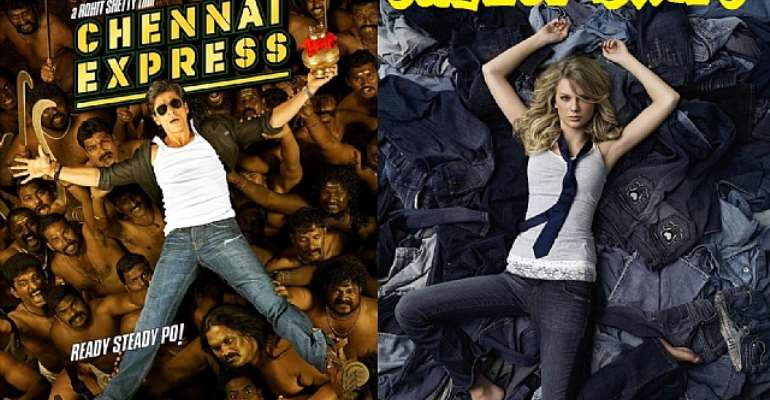 CHENNAI EXPRESS: Hanste Hanste Rona Seekho
Chennai Express is the 21st Hindi film to enter the (now stale/yawn) Rs 100 cr+ club. Taaliyan!!! (or should I say Gaaliyan). And there ends the objective for this documentary on Tamilnadu Tourism.


When the occasion is festive (Eid), the hundi is ready to be filled up with eager ever-willing / spending fans, there is a blitzkrieg of non-stop media, marketing and money spent like water, crass promotion spree with games releases etc, an entire week's free-run, competition trounced (Marathi Duniyadari and Tamil Thalaiva), mammoth release (3500) with countless shows daily in multiplexes alone and single screens counting, with ticket prices raised, the stage has been set by the big daddies (financiers) to rip the gullible apart. And to hell with the movie and the story. A documentary would do. Welcome aboard the Tamil Express. Were Ramaiya Vastavaiya released on Eid day, it too'd've done 100+ cr business. So it'd make sense only if CE ends up dong 300-500+ cr business. Let's see the star power. Let's see if this docu can survive a week and meet the next biggie the next week.

Manmohan Desai-Amitabh Bachchan, David Dhawan-Govinda and now RoHIT SHITty-Ajay Devgan was/is a sure-fire hit combo. Most of the time these combos rode on luck but at times their movies didn't succeed. Shitty is purely riding on luck and he extended the olive branch to the over-the-hill, unsure and faded SRK, who lapped it up like there was no tomorrow. And believe me, this is so true. CE has entered the club but where has it taken SRK? SRK has nothing new to offer. He has no more new milestones to cross or any records to set. The movie cannot add anything to him except fan his ego. It's time for SRK to reflect and re-invent himself. In a couple of years he'll be 50 and... Let me leave this here as we've to discuss something very important- the (non-existent) story.

The lucky letter K is abundant here in the train journey from Kalyan-Karjat-Kambam (Theni) to Rameshwaram. Forget Kashmir to Kanyakumari. A 40+ virgin hero, who is unsure whether he is Michael Jackson, Jim Carrey or Rahul of yore (I mean 20+ RAHUL) or whatever and makes faces to pass it off for acting (I guess, SRK has done better in his ads and photo shoots). The hero doesn't understand Tamil (so how did the director presume the viewer could follow this 60% Tamil padam. Wouldn't it be better for us to watch a genuine Tamil film Thalaiva?). The heroine does the translation but otherwise there is no mandatory sub-titling. Never mind as most of the viewers are doing what the hero is doing - NODDING yes and no. (Wonderful pastime). The heroine speaks Hindi in a funny accent and Tamil even more so but she sings songs in PERFECT Hindi! The toy train journeys through cardboard scenery. Wonder of wonders, a 35k cellphone thrown out of the train lands intact on STONES and is still functioning (phone/internet/text) like it is in a showroom. The TC too after being thrown in the river, walks out of the water in one-piece. Time to laugh! (Or shall I tickle you?)

To cut the shit out, I wanted a refund and I was livid with anger. I had not gone to watch a Tamil film and I wasn't prepared to see a middle-aged brat trying to raise a few laughs and cradle-snatching, not to say kid fighting (forget David and Goliath). After the Tamilnadu darshan, I wondered I should've taken a vacation down south rather visiting the theatre. There are small mercies in the form of dew-fresh Deepika Padukone (hat-trick babe), unnecessary Punjabi cop Mukesh Tiwari and koyla groom Niketan Dheer.

Don't ask me for any more story as I'm still deciphering it. The docu-drama was certainly colorful. I'm happy it has made 100+ cr in 3.5 days. Good. There is a future for documentaries in India. SRK has paid tribute to his south-born mom through this whatever. Next a Peshawari-Afgani film for his dad. And next what? I couldn't care less. Par sochne ki kya zaroorat hai. I was among the countless, who contributed to the Eid hundi.

Kahin ki eent kahi ka roda, bhanumati ne kumba joda. So when the aim is this lofty, could the product be classy. Well, Aamir took the class, Salman remains with the masses and remaining takes the crass.

About two decades back a young lad took risks and gave us magic like Darr, Baazigar and Anjaam. He had charm, energy and infectious enthusiasm. He was all over the place and repeated success after success with DTPH, KKHH, KKKG, and Devdas. He could play an old man in Main Hoon Na or even RNBJ but the viewer still craved for him. For he was enacting the common man. But then age caught up with him and antics took over. The artist crumpled under the coveted club and public craze. Ra.One was the precursor, followed immediately by Don 2 and JTHJ. The club survived but the artist died. CE is just the icing on the cake. Rahul of yore can never come back but the star has to reinvent himself.

After losing money on this pathetic fare, I thought to have a feast on Raj Babbar's tom-tomed Rs 12 meal. The dhaba fellow thought I was crazy and shooed me away. I cajoled him with a free CE ticket. He was so livid that he ended up offering me a free meal. With the release of the movie, at least the movie is now confined to the theatres and the common man is spared of the tiresome never-ending marketing. I thanked him for the free meal. I was happy. We both were travelling in the same boat. And countless others too. After the hearty meal, had a good night's sleep without any mortal fear of kaale daanav. Were they humans? Never mind!