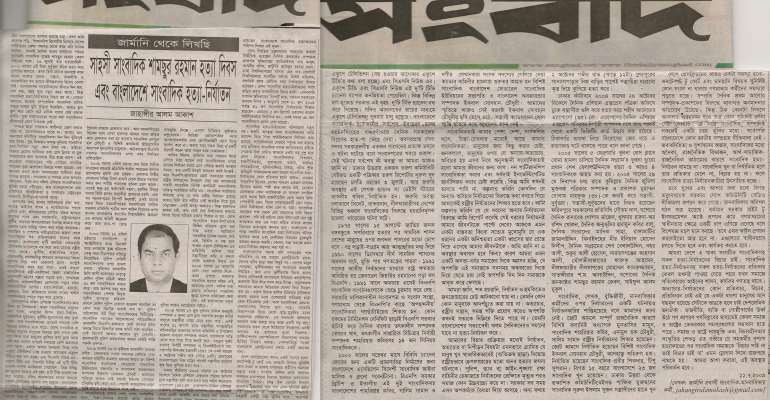 An article about press freedom which was published in the oldest national Bengali daily Sangbad.

By Jahangir Alam Akash, In Bangladesh press freedom attacked by the law makers of ruling party Bangladesh Awami League. One after another attacked on journalist by ruling party men, but the government hasn't taken any action against the perpetrator of journalists. Journalist's killings, tortures and oppression are very common feature in Bangladesh. The present government of Bangladesh has committed to the peoples for mass media freedom. But, in practice hasn't like commitment.

The latest Patuakhali incident apart, harassment either in the form of physical torture or filing false cases is on the rise in recent days across the country. At least 130 journalists felt prey to various types of harassments in the country since January (reports Odhiker). Two journalists were killed, 46 injured, 11 assaulted, 13 attacked, one abducted, 43 threatened and three sued in past eight months till August. Unidentified terrorists at Mirer Bazar in Gazipur killed the executive director of 'Samprotik Somoy' MM Ahsan Bari on August 26 this year. A total of 25 journalists were killed in last 16 years in the country.

The reports of the two journalist siblings on encroachment on a river in coastal Patuakhali drew flak from local ruling party lawmaker and a number of 'false cases' were filed against them reportedly under political instigations. Four cases were filed one after another against the two journalists of the Prothom Alo and the Amar Desh at Golachipa in Patuakhali--Israt Hossain Lipton and Saimon Rahman Alit--in last one week allegedly by the cronies of Awami League lawmaker Golam Moula Roni. Reports: the daily Star, 18.9.2009.

Sources said, the cases were filed in a bid to avenge their reports on grabbing land on a riverbank and setting up a market under the direct patronage of the local lawmaker, family of the journalists claimed. The Prothom Alo and the Amar Desh carried the reports on August 21 and on August 27, 2009. Lipton's wife and daughter left their Golachipa town residence and moved to their village home amidst repeated threats from ruling party cadres, family members claimed. On September 8, Moslem Bayati filed an extortion case against two journalist brothers with local police station at Galachipa. The second case a rape charge against Lipton was filed by one Nilufa Begum, wife of Selim of Chhotoshiba village under Char Kajal union in the upazila, on September 10, 2009.

Same source told, Laizu Begum, another woman of the same area, filed an extortion case against Lipton and Alit claiming that they took Tk 9,000 from her assuring her of allotting a house under Sidr recovery programme implemented by the Prothom Alo. The last case was filed by Hamidullah of Golachipa municipality area on September 13, 2009 claiming that Lipton and Alit took Tk 30,000 from him promising that a house under the same programme would be allotted to him. While police registered all these cases against the Prothom Alo and Amar Desh Golachipa correspondents, they have so far declined to entertain a case filed by a journalist on September 9, 2009 on charge of attacks on newsmen by the cadres loyal to local MP.

In Chuadanga, the Amar Desh correspondent Dalim Hossain has been put behind bars after a ruling party lawmaker from Chuadanga, Solaiman Haque Joarder Salon and his brother municipality mayor Reazul Islam filed a case on September 1 against 80 including two journalists Dalim Hossain and Shah Alam of the Prothom Alo.

Mr. Motiur Rahman, a prominent and pioneer journalist and the editor of famous national Bengali daily Prothom-Alo wrote with a commentary column about the present situation of press freedom in Bangladesh. (Source: Prothom-Aöo, 17th September, 2009). We congratulate to him for his informative and very good write-up. The regime of BNP-Jammat hundreds journalists were brutally tortured and some many were killed. We don't have any idea in that time how many special column he had written about press freedom?

We know very well to Mr. Rahman. He is playing glorious role in the media world in Bangladesh from long time. We saw when the journalists of Prothom-Alo attacked then he raised voice against journalist's repression. See the link: http://www.drishtipat.org/blog/2007/10/30/meet-the-tipu-sultan-of-2007/ In the regime of army backed caretaker government many journalists were brutally tortured by army. Even, a cartoonist Arifur Rahman of Prothom-Alo was arrest by the pressure of Islamic group. Tasneem Khalil of the daily Star was brutal tortured by DGFI. But, Mr. Rahman was silent in that time, even still.

And I also illegally arrested, inhumanly tortured and detained by army (RAB) in the same regime. Still I have been facing two false and fabricated cases.

I was victimized with four false, fabricated and political motivated cases in the regime of caretaker government.