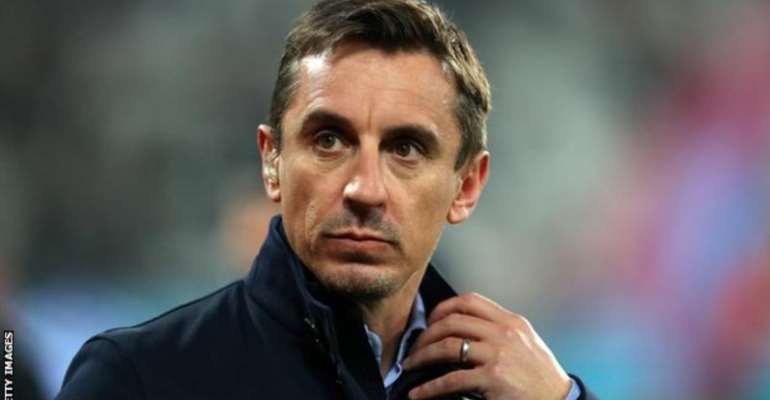 Former Manchester United right-back Gary Neville has criticised the club's recruitment and says things are "going to get bad" at Old Trafford.

Ole Gunnar Solskjaer's side lost 2-0 at Premier League leaders Liverpool on Sunday, a result which left them 30 points behind their Anfield rivals.

"They have made some terrible investments in terms of recruitment," Neville told his podcast.

"It's all coming home to roost. This is going to get bad. The next six months are going to be really difficult."

They also brought in striker Romelu Lukaku for £75m a year later, while they signed forward Alexis Sanchez in January 2018 on a four-and-a-half-year deal worth £14m a year after tax.

Lukaku and Sanchez have both since joined Inter Milan, the latter on loan.

During the summer transfer window, United spent over £130m on defenders, bringing in Harry Maguire from Leicester City and Aaron Wan-Bissaka from Crystal Palace, and also signed winger Daniel James from Swansea City.

"Over the last few years there is a frustration that Manchester United have been U-turning all over the place when it comes to strategy," added Sky Sports pundit Neville, who retired as a player in 2011.

"I can't believe, with the investment that has been put into the squad over the last five or six years, you end up with that out on the pitch.

"I can't change the ownership of Manchester United - no-one can - but I am struggling to understand why the ownership has persisted in trusting that management team to oversee that investment.

"If you don't lose your job for overseeing that investment, that wage bill and putting that team out on the pitch, something is really wrong."

Sanchez cannot be recalled from Inter
United will not be calling Sanchez back from Inter Milan to help out with their injury crisis because there is no recall clause in the deal that took him to Italy on a season-long loan.

Sanchez has just returned after three months out with an ankle injury himself.

United manager Ole Gunnar Solskjaer said the club are looking at short term options following confirmation striker Marcus Rashford will be out for two months with a back injury.

Anthony Martial and Mason Greenwood are the club's only forward options.

BBC Sport also understands there is no chance of Gareth Bale leaving Real Madrid on loan this month.