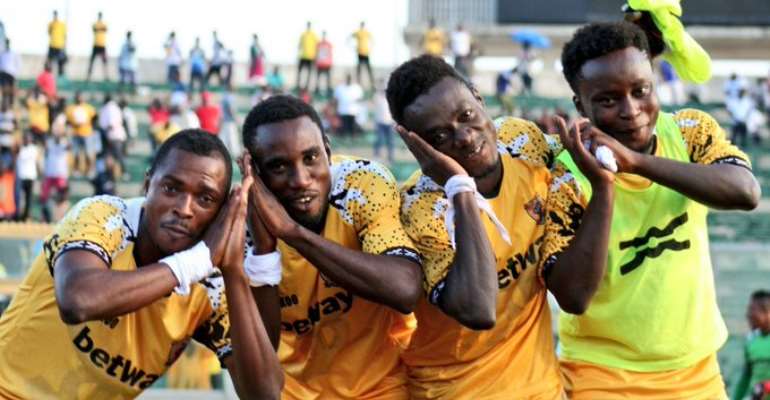 Ashantigold recorded a 3-2 victory over Moroccan side RS Berkane in the first leg of their second-round qualifying match in the CAF Confederation Cup at the Len Clay Stadium in Obuasi.

First-half goals from Eric Donkor and Shafiu Mumuni gave Ricardo Da Rocha’s men a deserved 2-0 at the break before sloppy defending at the start of the second half last year’s finalists to level through Mohammed Aziz and Hamdi Laachir.

Amos Addai then scored what proved to be the winner in a frenetic opening 15 minutes at the start of the second half.

Ashantigold started much like they’ve always done in Obuasi; quick, incisive and intense and it took only 18 minutes for them to get their reward.

Eric Donkor, who had been menacing with his runs down the left flank whipped in a dipping cross from the left flank on one of those occasions, RS Berkane goalkeeper Zouhair Laaroubi misjudged the flight of the ball which was meant as a cross as it dipped in behind him into the back of the net.

The Len Clay erupted as the miners celebrated a goal they had deserved.

Appiah Maccarthy then had a free-kick saved and another come off the crossbar in a completely dominant display by Ricardo Da Rocha’s men up to that point.

Ashantigold’s defense were organized as it was watertight. Berkane struggled to create anything in the first half on the few occasions they made incursions into the Miners’ area.

On the stroke of half time, captain Shafiu Mumuni scored Ashantigold’s 2nd of the day, his 4th goal in as many matches.

Moments after being treated for a suspected hamstring problem, Shafiu capitalized on a miscommunication between Issoufou Dayo & GK Zouhair in the Berkane backline to steal in a toe-poked goal.

Strikers play with instincts and Shafiu showed yet again what a predatory finisher he is.

Ashantigold were unrecognizable in the second half, conceding two goals in just the first 10 minutes.

But the second goal was almost like a transfusion that woke the miners from their coma. They were immediately back in front right after kick-off, with experienced Amos Addai’s shot just squirming under the goalkeeper across the line.

Ashantigold were back in front but it didn’t feel like it at that point.

Kwadwo Amoako fired over from outside the area and Appiah Maccarthy squeezed a free-kick under the wall which was comfortably saved as they probed in vain for a much needed 2-goal cushion that was carelessly thrown away.

Ashantigold will now head to Morocco for the return leg in a fortnight with a narrow lead that quite frankly feels like a defeat.