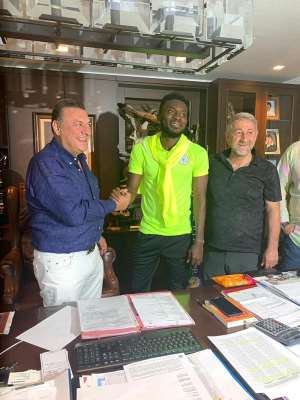 Ghanaian international, Joseph Attamah Larweh has officially completed his loan move to Çaykur Rizespor from İstanbul Başakşehir ahead of the start of the Turkish Super Lig.

The player has been in negotiations with the club in the last couple of days and has finally reached an agreement that will see the center-back playing for the club throughout the 2019/2020 season.

“Çaykur Rizespor transferred Joseph Attamah from İstanbul Başakşehir FK for rent”, a statement by the club confirmed the transfer.

It added, “We wish success to Joseph Attamah who has played in 79 official matches in Başakşehir for the last 3 seasons and lastly 59 minutes in the UEFA Champions League match against Olympiacos on August 13.”

Attamah Larweh, 25, is joining the club in hopes of enjoying regular playing time which would have been difficult to come by at İstanbul Başakşehir.

He only managed to make 11 appearances for the side in the 2018/2019 season though he stayed in good shape for most parts of the campaign.

With the Turkish Super Lig set to start this weekend, it is unlikely for the defender to mark his debut but he will surely be in contention to feature on match week two.