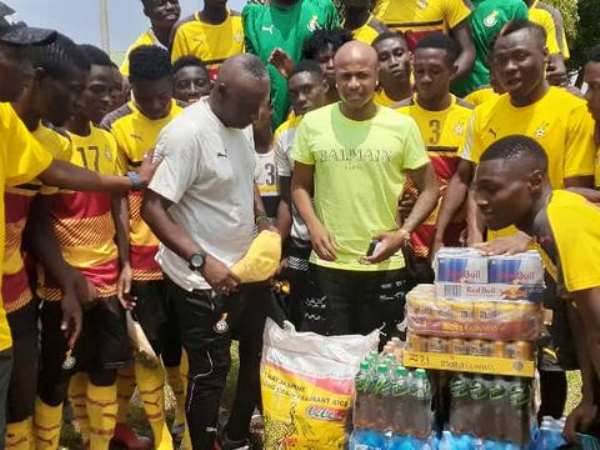 Andre Ayew donated to the national male football team of Ghana at their camping base at the Ghanaman Centre of Excellence at Prampram.

The Black Stars skipper donated items such as a bag of rice, carton of energy drinks, soft drinks and bottles of water.

The 29-year-old encourage the players as the future of the senior national football team of Ghana, the Black Stars.

This came to light in an interview with the Head of the Technical Sub-Committee of the International Games and Competitions Committee (IGCC) of the Ministry of Youth and Sports, Dr. Emmanuel Owusu Ansah.

Dr. Owusu-Ansah said the decision to drop the numbers followed experience from previous participation in similar games, notably the previous African Games and Commonwealth Games where Ghana sent huge numbers but had nothing to show for it.

He explained that the Satellites team was dropped because the Committee was not convinced they will fare better against the same countries they played at the Africa Youth Championship, having failed to qualify from the group stage.

“If we failed at that tournament with a combination of local and foreign players, there is no guarantee that the local components with less camping period with inactive players can make any meaningful impact at the Games.”

Andre Ayew was the skipper of the Black Starlets team that won the 2009 FIFA U-20 World Cup in Egypt- the first by an African nation.