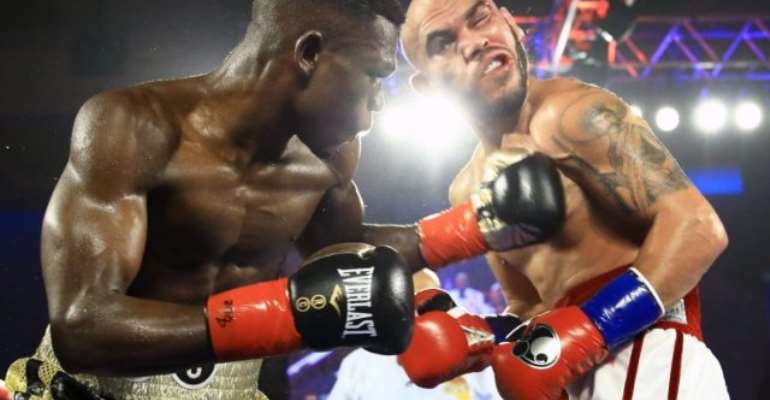 The fight headlined the Top Rank Boxing on ESPN card.

Commey (29-2, 26 KOs) overwhelmed Beltran (36-9-1, 22 KOs) with his power from the start, sending him to the canvas twice in the opening round, again in the fifth and once more in the eighth.

Beltran got to his feet after the fourth knockdown, but referee Edward Hernandez had seen enough and waved off the fight at 54 seconds.

Beltran, a former WBO lightweight world titleholder, suffered his second loss in three fights. He failed to make the 135-pound lightweight limit at Thursday's weigh-in and was not eligible to win the title.

Commey won his fifth straight fight, including his fourth straight by knockout. Friday night's victory could lead to an eventual showdown with undefeated Teofimo Lopez, the 2018 ESPN prospect of the year.

"Beltran showed why he was a champion," Commey said. "He's a great fighter who showed it against me tonight. I was happy to get the job done and defend my title for the first time."

Commey nearly stopped Beltran in the opening frame, forcing Beltran to take the mandatory eight count twice. To his credit, Beltran gathered himself and even had his moments in the rounds that followed.

Commey showed some holes technically, swinging freely and allowing Beltran to find some counter-punching opportunities, but he also proved he is incredibly stout and durable. While he was hit on the chin several times by hard left hooks from Beltran, Commey stayed composed and resumed his offensive barrage.

Commey outlanded Beltran 160-92, including 137-86 in power punches, according to CompuBox.

Friday's fight marked the first time since 2017 that Commey went beyond the sixth round. His only two defeats were close decisions on the road against Robert Easter and Denis Shafikov.

Now, Commey could be headed to a career-high payday against a talented young prodigy in Lopez in the fall. Top Rank chairman Bob Arum, who promoted Friday night's fight and handles Lopez's career, said a Commey-Lopez title bout will happen if Lopez wins his July 19 bout against Masayoshi Nakatani.

"That was a great performance by Commey, who showed why he is a great champion," Arum said. "Beltran showed courage and resiliency. Teofimo Lopez has a job to do against Nakatani on July 19, and if he takes care of business, Teofimo will challenge Commey for the title in what will be a tremendous fight."

Asked about a potential showdown with Lopez, Commey said, "It looks like Teofimo Lopez is next, but he has a job to do first. That would be a great fight."

The future is less clear for Beltran, 38, who was docked 20 percent of his $200,000 purse as part of his penance for missing weight. An agreement was struck between both camps to allow this fight to proceed if Beltran did not come in heavier than 146.8 pounds at the Friday morning weigh-in; Beltran was 145.6 pounds.

IBF rules had stipulated that regardless of Friday's result, Commey would remain its champion.

"He caught me with a good shot in the eighth round, and the referee decided to stop the fight," Beltran said. "Now I am going to get together with my team and figure out what's next. If I fight on, I will move up to 140 pounds."