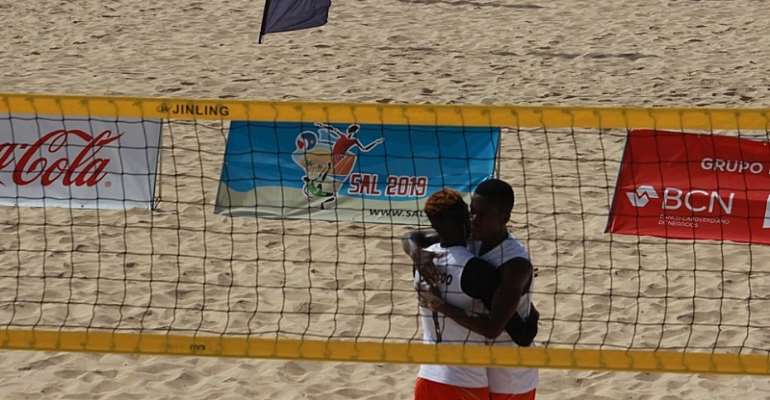 Ghana’s players, Kelvin Carboo and Sammy Essilfie who knew that they have to take something home after the karate-do and freestyle footballer has missed the medals to place fourth inspired themselves and won the first set against Nigeria by 22-20.

Ghana won the second set by 21-17 to brush aside Nigeria by two straight sets. Next game is against Central Africa, and the defeat means the Nigerians are out of the competition following their opening game loss to Central Africa.

Ghana’s coach Moro Mumuni was very happy with the performance and hopes the players will improve in their next game.

In Ghana, president of the Ghana Volleyball Association, Paul Atchoe said the victory over Nigeria is a great birthday presentation as he celebrated his birthday on Friday, 20th June.

The vice president of the Ghana Olympic Committee (GOC) and Chef du Mission for the next Olympic Games in Japan noted that the volleyball team can win a medal if they are motivated.

He called on corporate Ghana to support Ghana Sports as there are many talents who must not be wasted.

Ghana's participation at the SAL 2019 first African Beach Games was made possible by the GOC, Toyota Ghana, Allied Oil and Ashfoam.