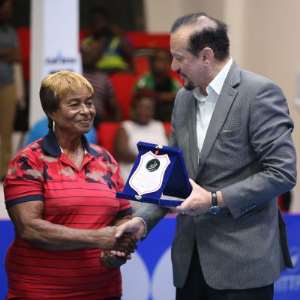 Quietly, unobtrusively, Ethel Jacks walked into the Sports Trust Emporium in Accra on Thursday 11th April, the venue of the 2019 ITTF African, Youth, Junior and Cadet Championships; not many players were sure of her name but quickly, some older coaches, recognised her, they started and exchanged pleasantries.

Ethel Jacks won the women’s singles title at African Championships on three consecutive occasions; she succeeded in 1964 when like today, the host city was Accra; later in 1968, she won in Lagos before in 1974 once again being crowned the champion in Alexandria.

A special award was made in her honour. “I am so happy that this long-awaited recognition finally was given to me even in my lifetime. I am grateful to the African Table Tennis Federation or this special award and I believe this will also motivate the present players that their labour will not be in vain.” Ethel Jacks

Significantly, Ethel Jacks called for a one-minute silent for her doubles’ partner, the late Ernestina Akuetteh with whom she won gold at the African Championships in 1964 and 1968.

“Ethel Jacks put Ghana on the African map with her performances in the 1960s and 1970s; she is one of the three players in Africa to have won the African Championships thrice in the history of the tournament. So the African Table Tennis Federation believes honouring her will inspire upcoming players in Ghana to aim high and exceed Ethel Jacks’ feat.” Khaled El-Salhy

The two further players to have won the women’s singles title at an African Championships on three occasions are Nigeria’s Bose Kaffo and Olufunke Oshonaike.