Dwarfs, Hearts Among 43 Best And Weirdest Named Football Clubs In The World 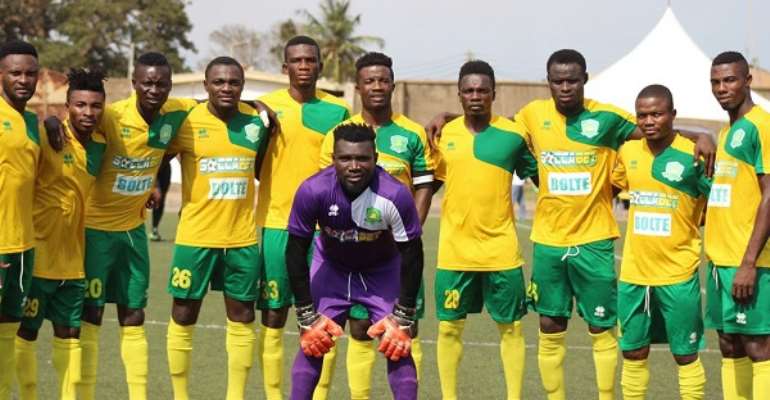 Ghanaian football clubs, Ebusua Dwarfs and Hearts Of Oak have been ranked in the latest best and weirdest named football clubs in the world by planetfootball.com.

Football is full of boring team names like ‘United’, ‘Rovers’ and ‘City’. Look in the right places, however, and you’ll find some really good ones.

The rapid rise of fantasy football and casual five-a-side has changed what we think of as a football team name. ‘Inter Ya Gran’ is now officially the most popular club name in the world, and similar obscenities aren’t far behind.

But while anyone can make a silly pun, not everyone gets the chance to make a silly name for a football club playing in its country’s premier division.

What follows is a list of the 43 most brilliant football club names from around the world. Not all of them are major forces in world football, but every single one plays in its country’s highest league.

You’ll know a few of them. You’ll be surprised by others. You’re guaranteed to become a die-hard fan of at least one of the top five.

43. Millonarios F.C.
Bogotá, Colombia
Initially the ‘Municipal Sports Club’, the ‘Millionaires’ got their nickname — and eventually their official title — after hiring expensive Argentine players in the late 1930s.

Show-offs.
42. LA Galaxy
Los Angeles, USA
Football icons like David Beckham, Steven Gerrard and Zlatan Ibrahimović have turned the Galaxy into a global brand. Which is fitting, since the name ‘Galaxy’ was chosen to represent the ‘stars’ of Hollywood.

41. Kick4Life F.C.
Maseru, Lesotho
Founded by two brothers from Southampton, Kick4Life is both a club and a registered charity.

“Our approach is based on the belief that football clubs do not always have to be run for private profit, and that we can more effectively leverage the enormous wealth and influence of the football industry for social development by becoming a part of it,” they say.

Delightfully, its crest features a coffee pot!
38. Accra Hearts of Oak S.C.
Accra, Ghana
Founded in 1911, Hearts of Oak won the CAF Champions League in 2000, but were denied the chance to appear in the Club World Cup after the 2001 edition was cancelled.

Nice one, FIFA.
Stephen Appiah, once of Parma and Juventus, began his career there.

36. New Radiant S.C.
Malé, Maldives
A link to the official website was just a ‘Your Mac is infected’ pop-up.

35. RasenBallsport Leipzig e.V.
Leipzig, Germany
A case of so bad it’s good?
Statutes in the German Football Association (DFB) meant Red Bull couldn’t use its own name when establishing the club in 2009.

The soft drink purveyor instead went for ‘RasenBallsport’, which means ‘Lawn Ball Sports’ but looks enough like ‘Red Bull’ to make you remember where the money’s coming from.

34. Solid S.C.
Anuradhapura, Sri Lanka
Other teams in the Sri Lanka Premier League include the Upcountry Lions, Renown and Super Sun, but Solid Sporting Club get the nod for hosting matches at the ‘Prison Ground’.

Solid were national champions in 2014-15.
33. S.V. Robinhood
Paramaribo, Suriname
S.V. Robinhood was founded in 1945 as a community club for poorer citizens. They are the reigning champions of Suriname.

29. Nyasa Big Bullets F.C.
Blantyre, Malawi
The most successful team in Malawi and its reigning champions, Big Bullets play at the 65,000-capacity Kamuzu Stadium. The club says it has around six million fans.

28. Urawa Red Diamonds
Saitama, Japan
This club is named after the three red diamonds that make up the Mistubishi logo. I don’t think that takes any of the sheen off.

Will the club eventually die in a cloud of liquid nitrogen? Who knows?

24. BSC Young Boys
Bern, Switzerland
The Young Boys Bern squad has an average age of 25 years and 3 months. They are the reigning Swiss champions.

Radebe would go on to play for Leeds United, ultimately inspiring that band to adopt the name ‘Kaiser Chiefs’. Not sure if we should be thankful for that.

I’d honestly never thought about it before.
20. Motor Action F.C.
Harare, Zimbabwe
Despite its name, Motor Action has a bull on its crest.

According to FIFA, the origins of the name are “shrouded in mystery and have sadly evaporated into the mists of time”. So that’s that.

Yes, of course there is a grenade on the crest.
16. Club The Strongest
La Paz, Bolivia
Originally known as ‘The Strong Football Club’, the founders ultimately decided in 1908 that ‘The Strongest’ was better. Best, even.

Co-founder Victor Manuel Franco knew how to say it in English, and they eventually went with it.

15. Miscellaneous S.C.
Serowe, Botswana
Miscellaneous Sporting Club was founded in 1962 by Seretse Khama, the first president of the Republic of Botswana. Their kit is red and white.

With a capacity of 1,000, the Effortville Community Centre is the smallest stadium in the Jamaican top flight.

The crest is good because it looks like the Manchester United logo went off the rails, lost its job and its confidence and was photographed, sheepishly, just trying to hold it all together for the sake of its kids.

9. Club Blooming
Santa Cruz de la Sierra, Bolivia
According to the club’s official website, the name ‘Blooming’ was chosen by a local English teacher because it was synonymous with ‘resurgence’ and ‘flourishing’.

I feel like that doesn’t really answer all the questions I have, but sure.

8. Shimizu S-Pulse
Shizuoka, Japan
According to its official website, Shimizu S-Pulse has a club philosophy based on three principles: Common Dream, Common Excitement and Common Pride.

On the name:
S-Pulse was named following a combination of the capital letter ‘S’ for ‘SOCCER, SHIMIZU, SHIZUOKA’ and the English word ‘PULSE’ to describe the excitement of football-loving citizens and their team spirit.

7. Inter Godfather’s
Garapan, Northern Mariana Islands
Very lunchtime five-a-side. They used to be called ‘Fiesta Inter Saipan’, but this is much better.

And what’s cooler than being cool? Finishing seventh in the 2018 PFF Women’s League.

5. Club Always Ready
La Paz, Bolivia
Bolivia’s División de Fútbol Profesional makes a strong case for having, overall, the best-named teams in world football. One of the big hitters is Always Ready, founded in 1933 and playing in a kit similar to that of River Plate.

4. Dandy Town Hornets F.C.
Pembroke Parish, Bermuda
The Hornets won their last league title in 2016 and reached the first round of the CONCACAF Champions’ Cup in 1991.

Their kit — sadly not worn with flowers or a bowler hat — is a sort of bronze colour.

Sticking with Bermuda a moment, and a special mention must go to Flanagan’s Onions F.C., who were unfortunately relegated from the top flight last season and thus do not qualify for this list.

2. Chicken Inn F.C.
Bulawayo, Zimbabwe
Unsurprisingly, this club is named after its sponsor, a fast food chain. But money buys success, and the club became national champions in 2015.

They have a really cool stadium and an even cooler name.

To be honest, they’d have been #1 if they’d gone with ‘Mysterious’ or ‘Dwarfs’. That they’ve used both is just bloody lovely.