Ghanaians Must Be Compensated With 2019 AFCON Qualification - Nana Ampomah 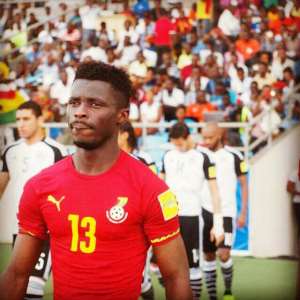 Black Stars newcomer Nana Opoku Ampomah is saddened by Ghana's inability to qualify for the 2018 FIFA World Cup in Russia and wants the team to compensate Ghanaians by qualifying for the 2019 AFCON.

Ghana failed to make it out of Group E to qualify for the World Cup for the 4th consecutive time, surrendering the ticket to Egypt who have missed the tournament since 1990.

A poor start to the campaign saw Ghana drawing goalless with Uganda in Tamale and losing the second group game to Egypt in Alexandria to give the Pharaohs a huge leap in front of the group.

The Black Stars will miss out at the tournament they first qualified in 2006 as they were expecting to make a fourth-time appearance.

But their inability to steal a ticket for their fourth World Cup is not only a worry for most of the players but saddens new boy Nana Ampomah.

'It's painful that we have missed out of the World Cup but that is football, you can't always win. We will, however, have to compensate Ghanaians by qualifying for the 2019 AFCON to be hosted in Cameroon,' he told GHANAsoccernet.com

'We have to make sure we win our matches to pick a ticket for the 2019 AFCON and make Ghanaians happy by making it to Cameroon and try to win the trophy,' he added.

Nana Ampomah made his debut for the Black Stars in the clash with Egypt in the last group game of the qualifiers but was forced out of the game due to a nose injury he sustained during the first half of the game.

Ampomah was promising to be a huge threat to the Egyptian defence until his unfortunate injury that took him out of the game and was replaced by Patrick Twumasi.