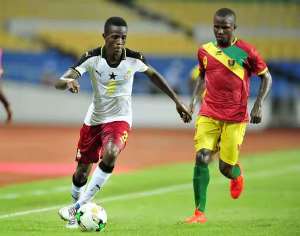 Ghana U17 star Gideon Acquah opened his scoring account to rescued a point for Brong Ahafo-based Bofoakwa Tano in the GN Bank Division One League with a fabulous finish against Techiman Eleven Wonders.

Acquah expertly converted a spot kick in a fabulous way that left the Berlin FC goalie unmoved as the ball entered the net following a hand ball in the glaring view of the referee.

The U17 left back dazzled spectators with his swift attacking game as well as providing excellent crosses for his strikers.

He speed up his game to level the scoring after the visitors had shot themselves ahead in the early minutes of the game.

Acquah who is currently on loan at Bofoakwa from Accra United SC is currently being monitored closely by Austria side FK Austria Wien and French side Bastia.

He played a key role in Ghana's silver medal winning feet at the 2017 Afcon in Gabon last month.