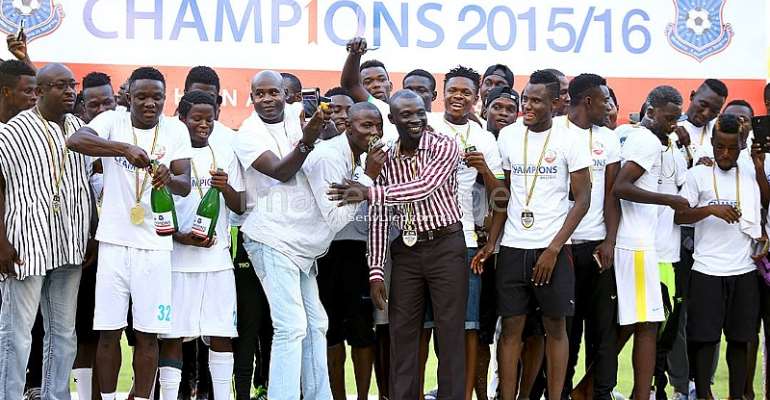 Champions Wa All Stars were thrashed by relegated Hasaacas in what was to be a coronation game for their historic feat.

Samuel Afful hit a brace for the home side and Papa Arko added the third. All Stars can be pardoned as the players are still in celebration mood.

Latif Blessing did hit a hat-trick to save Liberty Professionals from being relegated and also finish the season as the league's top scorer with 17 goals, a magnificent feat by a winger.

Second on the Top Scorers Chart with 15 goals, Yahaya Mohammed failed to score for the 2nd game in a row with his club Aduana drawing at home to Inter Allies. Bright Adjei scored Aduana's leveler, his 12th of the season after going down to a goal from Prince Baffoe. The away point saw Inter Allies avoid relegation with just a point above Techiman City.

Eric Ametepe, Stephen Owusu, Nana Tei Horsu and Stephen Amankwa got the goals to send the Real Citizens back to the lower division after just a season in the elite division.

Two first half goals from Stephen Bentil and Joseph Amoah was all Dwarfs needed to beat Dreams FC to avoid relegation.

On from the midweek 8-goal thriller with Asante Kotoko, Ashanti Gold were involved in another goal-fest , this time round a 6 goals thriller in Tarkwa against Medeama SC. Kwesi Donsu scored a brace to move his goal haul to 15, joint second with Yahaya Mohammed. Shafiu Mumuni, Dauda Mohammed and Anthony Yerful were on the score sheet for AshGold.

The draw ensured Medeama remained in the top4, edging Kotoko who defeated WAFA by 2 goals to one by a superior head-to-head record.

Hearts of Oaks consolidated their spot in the top 4 with a win over relegated New Edubiase United. The Phobias went to recess with a goal behind but managed to reply with three goals in the 2nd half from Patrick Razak and Cosmos Dauda (2).