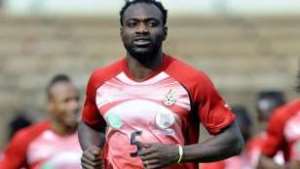 The Ghana Football Association (GFA) on Tuesday 10th May confirmed John Mensah as the substantive captain of the Black Stars.

John Mensah then a Sunderland defender was in an acting role following the resignation of Stephen Appiah from international football in 2010.

'As far as we are concerned, there has never been an issue of captain and deputy. John is our substantive captain and since Appiah retired, he's been working in that capacity,' FA Vice-President Fred Pappoe said.

'We've heard in sections of the media about this particular matter, but there is no issue at all. He is well-respected in the team and he is shown beyond reasonable doubt that he has massive qualities and he will continue to lead the nation in that capacity.'

The 31-year-old defender who plies his trade in Slovakia for Nitra fc is no more an active member of the Black Stars.

He was succeeded by Asamoah  Gyan as the skipper of the Black Stars in 2012.

Mensah made his Black Stars debut in December 2001, after guiding Ghana to a second place in the World Youth championship in 2001.

The Rock of Gibraltar as he is affectionately called played crucial roles in both the 2006 and 2010 World Cups.