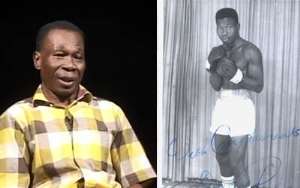 David Kotey born on 7 December 1950 in Accra, Ghana, was a world featherweight boxing champion between 1975 and 1976 and was the first Ghanaian professional boxer to win a world title. He was popularly called "D.K. Poison". DK Poison started his amateur career on in Accra.

He is one of many boxers spawned by Bukom, a suburb in the heart of the city populated by the Ga people. Many top Ghanaian boxers such as Roy Ankrah, Azumah Nelson Alfred Kotey and Ike Quartey are products of Bukom.

David Kotey turned professional under trainer Attuquaye Clottey. His first professional bout was on 5 February 1966 in Accra when he outpointed his opponent over six rounds. He became the national featherweight champion that year.[2] Although he fought once in neighbouring Togo in 1967, all his subsequent fights through to 1971 were all in Ghana.

In 1972 however, he fought as much as seven times in Australia, winning five and losing two. He won the African featherweight title on 2 February 1974 when he knocked out Tahar Ben Hassen in the first round of a scheduled 15 round fight in Tunis, Tunisia.

Later on 7 December 1974, he also won the Commonwealth featherweight title with a technical knock out over Evans Armstrong, a British boxer in round 10 of a scheduled 15 rounds bout. This victory gave him an opportunity to go for the World Boxing Council version of the world title. On 20 September 1975, in The Forum, Inglewood, California, United States, he beat Rubén Olivares by split points decision after 15 rounds to become the first Ghanaian world boxing champion.[3] He relinquished the African and Commonwealth titles following this victory.

The Ghana government gave him an estate house at Teshie-Nungua, an Accra suburb in honour of this achievements in boxing. He however lost the title in his third defence on 6 November 1976 by unanimous points decision to Danny "Little Red" Lopez in a fierce fight in Accra, Ghana..He also defeated Fuku Yama in Japan.

DK Poison was never the same again after this defeat. He failed in 1978 to regain either the world or commonwealth featherweight titles. His last professional bout was in 1989 when he lost an African lightweight title fight.

David Kotey has lived a relatively modest and quiet life after retirement. He has gone through marital and financial difficulties and reportedly has some grievances about how his purse was disbursed during his boxing years.He is married with three daughters.

According to reports and Kotei's own story, in 1976, he loaned an amount of 45,000 dollars to the Government of Ghana, then led by Ignatius Kutu Acheampong. The money was intended for the purchase of canned mackerel to mitigate the harsh economic and food conditions the country was facing.

The loan had been facilitated by his management, which was led be Col John Slater.[5] According to Kotei, the money was part of his reward for defending his title against Japan's Fuku Yama in 1976. The loan has not been paid back to date because shortly after the canned mackerels arrived in the country, the Acheampong's regime was overthrown by the Jerry John Rawlings in a coup.

The orthodox boxer retired with a record 48 fights, 40 wins, 24 by KO, 7 loses and one draw. As the first Ghanaian to become a World Champion in the Featherweight Division, he stands tall as one of the living legends of Ghana Sports, especially boxing. Bukom Boxing News congratulate him and wish him well.