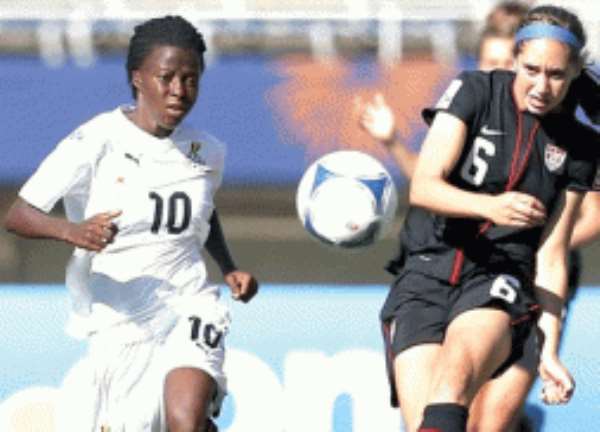 A lethal combination of lack of confidence, failure to play to instruction and injuries are believed to have conspired against Ghana after the Black Princesses made a poor start to their FIFA Under-20 Women’s World Cup campaign in Japan.

Ghanaians’ hope turned into despair and disappointment last Monday as the Princesses were outclassed 4-0 by the United States in their opening Group D match, a humiliation captain Mercy Myles attributed to failure by the players no translate what had been discussed and taught in the dressing room into action.

“In a way we accept the blame because we gave up too easily in the second half when the instruction was that we had to fight to the very end. We were told to release the balls in time but in most times we hanged on to it and gave the Americans the time to play.

“The manner in which the goals were conceded also demoralized the team in a way and affected our confidence,” Myles, who is captaining the team for the second successive World Cup, admitted in a post-match interview.

The Princesses, who two years ago, in Germany, had pushed the Americans to the wall with a seventh minute lead till the 70th minute when the Americans equalised, had hope to repeat that feat and possibly win but that dream fizzled out as they ended up being thrashed 4-0 by the Americans.

It started with an own goal from Linda Addai before Maya Hayes turned on the heat and took advantage of break down in communication in the Ghana team to score a hat trick in the 50th, 74th and injury time goal.

That victory was well celebrated and for most Ghanaian fans, it was as if the young ladies were trying to pay Ghana back for the pain the Black Stars caused their senior men when they met at the 2010 World Cup in South Africa.

While the defeat has given Ghana’s coach Robert Sackey a lot to think about ahead of their second game against Germany tomorrow, his American counterpart, Steve Swanson is a happy man even though he admits “it’s one of three important group matches to be taken care of.”

The Americans were not only joyous about the good start, but they were relieved they had been able to tame the unyielding Ghanaians.

“We did not know what to expect from Ghana because they are a very good side and for the first 20 minutes, they looked like they could hurt us but the game is played within 90 minutes and we took advantage of some of their weak points and we are relieved it worked. At least we’ve had a good start compared to what happened two years ago,” Coach Swanson told graphic.com.gh.

While he was full of admiration for the Princesses, he did not believe they could cause a stir and book a quarter-final place ahead of either the Americans or the Germans who are favourites to win from Group D.

“I think as a fantasy, everyone including those who lose their first match dream of advancing but in reality I believe the USA and Germany will be the ones to advance. I don’t know about the others but I’m here to have a shot at the title and that means getting past the group stage,” was Coach Swanson’s candid answer when asked who he thought would make it to the next stage.

At the time that the Americans beat the Princesses, Germany also won 4-0 against China from the same group setting the tone for two explosive games tomorrow where Ghana seek to claw back against Germany while the Chinese also hope to make amends against the Americans.