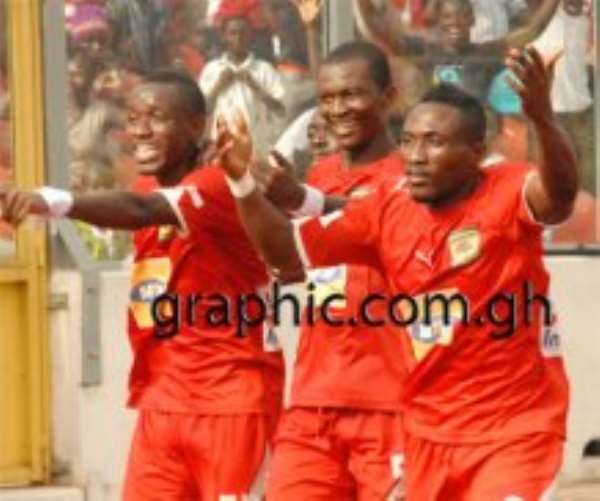 As many club sides in the country are busily in the search of players for next season. The usual struggle that ensue between Accra Hearts of Oak and Asante Kotoko over the recruitment of new players persists.

Until recently, when clubs like Bechem Chelsea, Medeama FC and New Edubiase could also put in requests for top rated and expensive players in the local league, Hearts of Oak and Kotoko had dominated the transfer market scooping all the best players to their folds.

It is worth noting however that the influence of these two clubs on the local market scene has not totally diminished with the presence of these teams as they continue to enjoy wide support than all other clubs and thrive on rich histories. Accra Hearts of Oak after a disappointing league last season will like to bounce back in style to make a strong claim for the league title. The largest share holder of the club Togbe Afede has promised the fans of the club to sign many good players for the club whilst jealously protecting the best players the club already has. He has announced a huge increase in the salaries of all players for the club and promised many incentives to entice the players to stay.

Kumasi Asante Kotoko on the other hand after winning the premier league title is hoping to retain the title and more importantly perform well in the African club championship. The management team of the club is zealously pursing the signatures of many players in the local league and making frantic efforts to hold on to its players. One of the players that Kotoko have set their sight on is mahatma Otoo of Accra Hearts of Oak. Kotoko has requested for Mahatma Otoo who is a key player for the Phobians and happens to be their top marksman currently. The official mouthpiece of Hearts of Oak, Hearts News reported earlier that Otoo will only be sold to Kotoko if they are able to qualify for the Club World Cup in 2013. However, in a different twist the Chairman of the National Chapters Committee Alhaji Akambi speaking to Angel FM claimed that the Phobians are now preparing a formal response to the request made by Kotoko in which they will demand five players from Kotoko in exchange for Otoo.

In an interview with Joe Laka host of the Angel FM sports show, Mr. Akambi said ''...we are writing a letter to Kotoko to request for five of their players before we issue Mahatma to them, if they will only give us those players we don't have any problem with letting them have Mahatma too...we are requesting for (Daniel) Nii Adjei, Awal Mohammed, Yahya Mohammed, Kofi Nti Boakye, and goalkeeper Suleima- it is always difficult for Kotoko to request for a player from hearts and vice versa, but if they are courageous enough to request then we will also let them know what we want. We will swap mahatma for three players and negotiate for the other two players...I know the price of the other two will not be expensive for us because we have their type of players already. After negotiations the players will undergo a 'blood test'- to prove they have our rainbow colours in their blood.....''

This comment by the supporters' leader has raised many doubts about the willingness of the Phobians to let go their top striker.