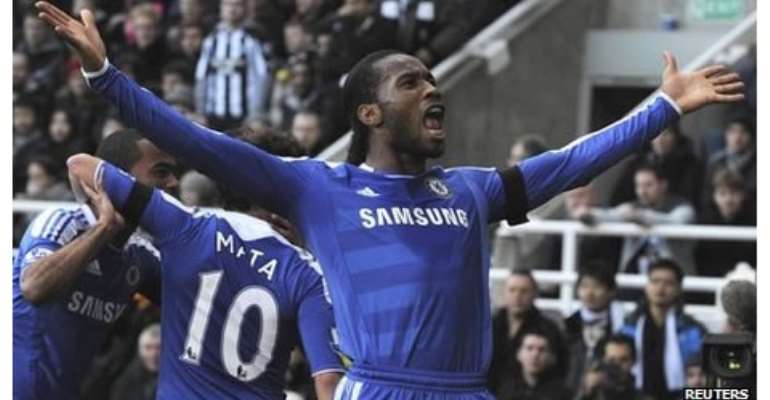 Didier Drogba and former Liverpool forward Fernando Torres appear to be in competition for one central striking berth in the Chelsea line-up.

Defenders Gary Cahill and David Luiz are out with hamstring injuries but Chelsea have no other injury worries.

MATCH PREVIEW
Chelsea coach Roberto di Matteo, who has transformed their season since taking over from Andre Villas-Boas at the beginning of March, has a special affinity with the FA Cup and holds two records that can never be broken.

His goal after 43 seconds for Chelsea in the 1997 win over Middlesbrough was the fastest scored in the final at the old Wembley and his winner against Aston Villa in 2000 was the last FA Cup final goal there before the stadium was demolished.

Now he has the chance to become the third Italian manager in three years to win the Cup after Chelsea's Carlo Ancelotti in 2010 and Manchester City's Roberto Mancini last year.

"It is important we keep going. We want to win the FA Cup, and the Champions League, and although we have done well to get to the finals, we have not won anything yet," he said.

Liverpool manager Kenny Dalglish regards the FA Cup final against Chelsea as more than just an opportunity to compensate for his team's disappointing Premier League season.

Dalglish believes there is still plenty of glory in winning football's oldest competition. "There is an obsession with the Premier League simply because of what it holds for every club and the value financially, but there is a satisfaction from winning a cup competition which you don't get from finishing fifth or sixth."

Liverpool have already picked up a trophy this season with a win over Cardiff City on penalties in the Carling Cup final in February.

MATCH FACTS
Head-to-head
• Liverpool have won 73, drawn 33 and lost 56 of 162 previous league and cup matches against Chelsea over 105 years.

• The Merseyside club are looking for a fifth successive victory over Chelsea, and a third this season, having won 2-1 at Stamford Bridge in the Premier League, and 2-0 at the same venue in the fifth round of the Carling Cup.

• The pair are meeting for the first time in an FA Cup final, and for the 10th time in the competition. All nine previous games produced conclusive results; Chelsea winning five, Liverpool four. The most recent was Liverpool's 2-1 triumph in the semi-final in April 2006, after which they beat West Ham and lifted the trophy.

Chelsea
• The 131st FA Cup final, is also Chelsea's 11th.
• The Blues are hoping to lift the trophy for the fourth time in six years, and the seventh in their history.

• Victory will keep alive Chelsea's hopes of becoming only the second club to complete the FA Cup and Champions League double, in succession to Manchester United's treble winning feat of 1999.

• Caretaker manager Roberto di Matteo has two FA Cup winners' medals with Chelsea; 1997 and 2000. Under Di Matteo, Chelsea have won 11, drawn four and lost two in all competitions. The midweek loss to Newcastle was their first in 12.

Liverpool
• Liverpool are competing in their 14th FA Cup final. Victory would see them winning the competition for the eighth time, making them the joint third most-winning club behind Manchester United (11) and Arsenal (10).

• Having beaten Cardiff on penalties in the Carling Cup final in February, Liverpool are now hoping to lift the FA Cup for the first time at the new Wembley.

• The Reds, who've failed to win six of the last eight Premier League games, have won all 11 domestic cup ties this season (two drawn), and are eager to become the first club to do the FA Cup/League Cup double twice. Only three clubs have won both domestic cups in the same season; Arsenal in 1993, Liverpool in 2001 and Chelsea in 2007.

• Kenny Dalglish is hoping to win his third FA Cup as Liverpool manager. He guided the Reds to victory in 1986 and 1989.

• The Anfield club have only scored two first-half goals in their 13 previous finals; John Aldridge after four minutes v Everton in 1989, and Djibril Cisse after 32 minutes v West Ham in 2006.

• Luis Suarez is Liverpool's top scorer with 17 goals, three of which were in the FA Cup. Andy Carroll has also scored three FA Cup goals.