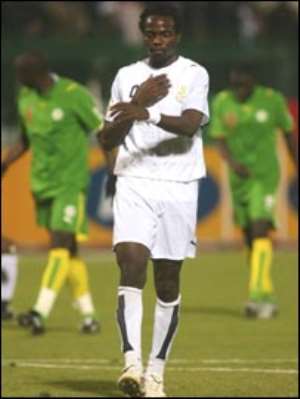 Several players of the Black Stars are unable to play in Wednesday's friendly against Zambia because of visa problems.

Hoffenheim duo of Isaac Vorsah and Prince Tagoe have been ruled out of the game because the UK embassy in Germany refused to give them visas.

The UK authorities have refused to hand the Ghana players their visas because they made their request at short notice.

Several other players in coach Milovan Rajevac's original squad have been unable to secure visas which has resulted in late call-ups.

English side Charlton Athletic have confirmed that theiur Ghanaian duo of Chris Dickson and Lloyd Sam have been given late invites.

Frontman Dickson, who has one cap to his name, will join the likes of Michael Essien and Sulley Muntari in East London, but Charlton manager Phil Parkinson said Sam will not make the short trip.

He confirmed: "Both have been called up. Dicko's gone but Lloyd has been suffering with a patella injury and that's why we brought him off on Saturday. We need to protect him this week so he'll be staying with us.”

Most of the players who were given the late call-ups will not have problems arriving in the UK as some hold European passports.

But all the key players for Ghana including Micahel Essien, Sulley Muntari, Stephen Appiah, John Mensah, Laryea Kingston, Richard Kingston and John Pantsil will be available.