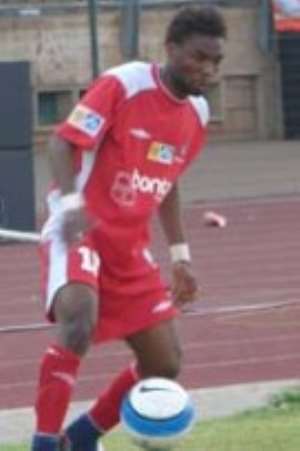 TELFER HAS NOT IMPRESSED South African Premier Soccer League side Free State Stars have transfer-listed Ghanaian midfielder David Telfer after struggling to command a place in the team.

The 20-year-old was signed by former Stars coach David Duncan alongside side defender Jonathan Mensah when he took charge of the side last year.

Telfer is one of eight players who are being offloaded by Free State Stars after the season ended last weekend.

The former AshantiGold player was down the pecking order in midfield and competition for a place with Captain Duncan Lechesa, Nigerian born Prince Olomu and Paulus Masehe.

David Telfer made his first debut for Free State Stars in the 2008 / 09 season, against Mamelodi Sundowns in the MTN 8 quarter finals.

Telfer played a major role when Free State Stars played in the one day tournament Phakisa cup in the off season.

His compatriot Jonathan Mensah has been a success at the club and is reported to be trying out at Ukrainian side Dynamo Kyiv.