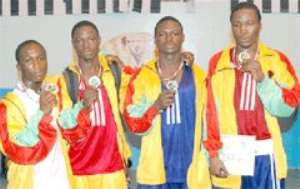 Four more members of the Black Bombers have qualified for the upcoming Olympic Games in China.

The four now join light flyweight Manyo Plange and middleweight Ahmed Saraku who qualified from a similar championship in Algeria on Ghana's ticket for Beijing.


In a telephone interview from their Safari Hotel base in Namibia, an elated captain Bastie Samir said this was a dream come true.

“My colleagues and I kept our focus and took each fight as it came. I just knew that I could make it from my first fight in which I knocked out my Namibian opponent in the first round. We thank all Ghanaians for supporting us with their prayers,” he said.


In his second fight, Bastie won on points against Izebo Dauda, a Nigerian, and in the final he knocked out Kenya's Aziz Ali in round two to seal his Olympic ticket.


Prince 'Octopus' Dzanie defeated Ethiopia's Anteddicha Giruhessi and Togo's Rafiu Joseph, but lost to Kenya's Nicholas Okongo. Dzanie, however, made up for the loss and defeated South African Ashley Dlamini in the third place bout to seal his Olympic place.


Speaking to the Graphic Sports, in another interview, Assistant Coach Ofori Asare said the level of conditioning of the boxers after their training at Winneba and the Ohene Djan Stadium gave him a firm belief that about four boxers could qualify.


“I prepared the boxers for the Algeria qualifier, and their response and rapid grasping of the techniques just gave me a lot of hope,” he said.


The team is expected back home today.

Budget approval: NDC and Adwoa Safo’s PA engage in ‘It’s her...
28 minutes ago