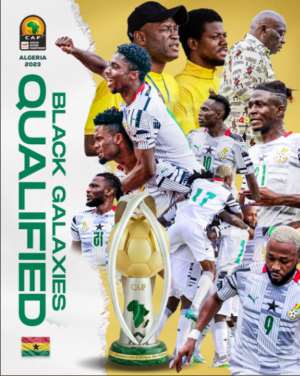 The Black Galaxies of Ghana have beaten Nigeria 4-3 on penalty shootouts to qualify for the 2023 CHAN tournament.

The Black Galaxies booked in the next edition of the CHAN after beating the Super Eagles B of Nigeria on penalties.

Second-half goals from Rabiu Muhammad Zulkifilu and Morice Chukwu aided Nigeria to record a 2-0 win over Ghana in the second leg tie at the MKO Abiola Stadium which ended the tie 2-2 but the winner was to be decided in penalty shootouts.

The Super Eagles ‘B’ after their poor performance at the Cape Coast Stadium in the first leg tie commenced the game with intense pressure on Ghana's defense with the hopes of opening the score in the early minutes.

Goalkeeper Ibrahim Danlad made two magnificent saves in the 25th and 32nd minute to deny Babatunde Bello and Chidiebere Nwobodo from opening the score.

The home team dominated the first half of the game but none of their efforts got them a goal as it ended in a 0-0 draw.

Ghana made tactical substitutions with the above-mentioned names as they cleared every inroad from the Nigerian attackers.

The Nigerians kept tormenting the back line of the Black Galaxies with fearsome attacks which their efforts finally paid off after the hour-mark.

In the 76th minute, Plateau United striker Rabiu Muhammad Zulkifilu snatched the opener for Nigeria with a fine strike to hand them a 1-0 lead.

The Super Eagles continued their impressive performance against Ghana as they piled up pressure on the visitors to double their lead in the dying embers of the game.

Skipper Morice Chukwu handed Nigeria a 2-0 win with his late strike in the 95th minute of the game at the MKO Abiola Stadium in Abuja.

Ghana have qualified for the 2023 Championship of African Nations [CHAN] scheduled to be hosted in Algeria after missing out on the last three editions of the tournament.