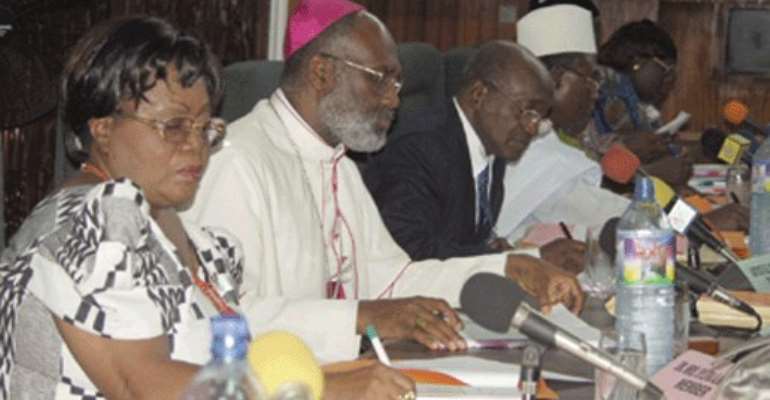 Fellow countrymen, as long as there are days and nights, the cock will do what naturally comes to it; crow and wake up those in the deep grips of sleep. Like the cock, the new African shall keep his listeners awake at all times. The on going Nation Reconciliation exercise (NRC) is a laudable and courageous step taken by the president and his cabinet. I hope no Ghanaian has any qualms about the NRC, unless of course they are said to be portraying injustice, or that person has something to hide. We must all, regardless of our political differences, see the NRC at least, as an honest effort by Kufuor to help Ghanaians confront the demons of the past and come to terms with a sordid and tragic period in our national history. Let's give credit where credit is due. The NPP deserves our praise and support, because given the nation's recent past political history and the cabal of players involved, reaching such a decision was gut wrenching. And let's not forget one very important fact; it is the truth that shall heal the wounds and pains of our people.

Fellow country men, any decision taken by our government however, needs to be scrutinized so as to avoid any future misunderstandings. Today we are all witnessing what is going in the NRC´s court rooms. Witnesses are being invited to voice their feelings about the injustice atrocities meted to them by the past demons. The idea behind this process is to find ways of reconciling the nation. To its credit, we should be hoping that the NRC has not limited itself to only testimonies from those who suffered injustice under the AFRC, P/NDC regimes only, but also listened to the pained and anguished cries of those who suffered similar injustice under the NLC, UP, PP, CPP, or UGCC regimes.

Fellow countrymen, today the names of those being called to testify before the NRC are those of the people who at one time or the other ruled Ghana and ran roughshod over her citizens. The witnesses should include former members of military juntas---NLC, AFRC, PNDC and political parties like UGCC, CPP, UP, PP and NDC. Most of cases being heard now could well wind up in the high courts or at the international court of justice in Dan Haig. Those convicted of causing human rights abuses will have to face Justice. Justice is what those who were victimized will like to see. Unfortunately, the same cannot be said of those responsible for the atrocities. They will like to maintain their position that their actions were justified by law.

Fellow countrymen, the question the new African will like to ask the courageous NRC set-up is this: Will the NRC spare the lives of those who brought about this brutal situation? We are all aware that it was the initiative of the imperialists namely: America, France, England, Cote d´ Ivoire and supported by the then UGCC, NLM,UP sympathisers who collaborated with the imperialist to over throw our elected government under the leadership of Dr. Kwame Nkrumah in 24th February 1966. To rationalize and justify their blatant usurpation of power, they accused him of dictatorship, declaration of one party state, proclaiming himself president for life, embezzlement of state funds, imprisonment of innocent people and opposition leaders, detracting the country from achieving its political goals, tribalism, mismanagement, using Ghana´s money in campaigning for Africa unity, and at last wanting to turn the country into communism etc, etc. Opposition leaders within UGCC, NLM and UP demanded Nkrumah´s crucifixion because his vision was far beyond comprehension. They said: "Crucify him, crucify him."

Traitors like: General Joseph Ankrah, General Kotoka, Major Afrifa, Police ACP Harley, Police Commissioner A.K. Deku (now a leading member of the NPP), Police Commissioner Nunoo, Police Commissioner B.A. Yakubu. Lt-General J.A. Ankrah justified the "crucifixion" of Nkrumah on the grounds that the opposition parties could not out-sted him through the ballot box. The only remedy therefore was terrorism and falsify allegations that would make the imperialists happy----getting rid of Nkrumah.

It is said their act was unconstitutional. They shared the state cake among themselves after over throwing Kwame Nkrumah, but conveniently forgetting the future implications of their action. The imperialist who initiated Nkrumah´s over throw, abandoned Ghanaians of their fate -- left them alone to solve their own problems. Today those who pick up the crumbs of what was left behind by staging counter coups have to bell the cat. We all know that Major Afrifa might have ordered the execution of military officers like Arthur and Yeboah who wanted to defend the constitution. Other victims are well known to everybody.

In AFRC and PNDC regime, Rawlings and his crusaders killed 8 (Eight) generals and later 3 (Three) judges just to mention a few. The dark days of Ghana really came, the blood really flew, and Ghanaians are now recollecting their faults. All those evil doers such as Rawlings and his henchmen have to appear before the NRC and explain to the country the reasons for their actions. They can run, but cannot hide from justice. It is said: “The evil that men do, lives after them”.

Fellow countrymen, it is said in Akan that: “It is not only Mr. Yakubu who has rashes on his buttocks, but Mr. Mumuni is also affected”. My question therefore is: if we now want to speak the truth, then let us all ask the NRC, what will happen to those who brought about the chaos and the mayhem in the first coup in 24th February 1966, namely: General Joseph Ankrah, General Kotoka, Major Afrifa, Police ACP Harley, Police Commissioner A.K. Deku (now a leading member of the NPP), Police Commissioner Nunoo, Police Commissioner B.A. Yakubu. Lt-General J.A. Ankrah. They unlawfully overthrew a constitutionally elected government, destroying our constitution and causing pain and havoc in our society.

The salient question staring us in the face is this: should those who brought pain and suffering to thousands of Ghanaians and caused so much anger and unease in our society go scot-free? How can we justify their actions? Were they above the law for staging such unnecessary coup?. What should be done about those who lost their lives and properties in the process?. We are all aware that most of the ring leaders are still alive and are perhaps happy to see the unfortunate ones face justice. I hope the NRC has got ears to hear if they really seek to reconcile with the people, and not trying to play any hypocrisy in their investigation process.

I hope someone out there with a clear mind will dispute what the new African is saying. There is no truth in our system, and there shall never be truth in our history until we all realize its necessity. I refuse to accept that there are insufficient justice in the great vaults of opportunity of this nation. I know the more I talk, the more people would want to see me crucified. When shall we be satisfied with the NRC´s investigations?. We can never be satisfied as long as the Ghanaian is the victim of the unspeakable horrors of police and military brutality. Yes, we of GSDM and the new African, no, no, we are not satisfied,--- and we will not be satisfied until justice rolls down like waters and righteousness like a mighty stream towards the ocean of freedom. GSDM is on its way coming and shall put the records straight. God bless you. God bless Ghana. Prince Aidoo Junior Ghana Social Democratic Movement Views expressed by the author(s) do not necessarily reflect those of GhanaHomePage. Source: