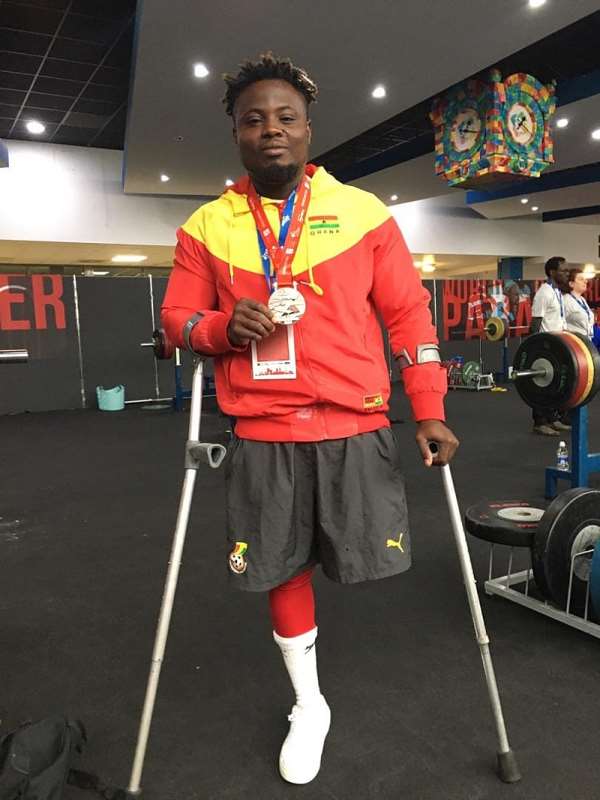 Ghana’s Powerlifter at the Tokyo 2020 Paralympic Games, Emmanuel Nii Tettey Oku weighing 70.54kg placed 7th out of 10 with a lift of 160kg.

He could not reach the medal zone, but the Ghanaian powerlifter Emmanuel Nii Tettey received a $5000 donation from a Japanese Philanthropist after his impressive debut at the ongoing Tokyo Paralympics.

The 30-year-old who was one of three athletes representing Ghana at the Paralympics competed in the Men's 72kg Powerlifting event was very impressive having placed seventh in the category.

The Philanthropist who wants to remain anonymous said he was impressed by the composure of the athlete in addition to his performance.

He later revealed that after reading in the Japanese daily newspaper and reviews on television about the feat chalked by Emmanuel Tetteh Oku, he was moved to help the young athlete who was making his first Paralympic appearance.

The Philanthropist who once resided in Ghana engaged the President of NPC-Ghana, Mr Samson Deen and NPC-Ghana Secretary-General, Mr Peter Adjei in a presentation ceremony also pledged to help to build an indoor Sports Centre for Ghana.

The NPC President Mr Samson Deen thanked him on behalf of the athlete for his kind gesture and assured him of greater successes in future events.

It is on record that Nkegbe Botsyo has made the most Paralympic appearances for Ghana, contesting in the T54 sprint events at three consecutive editions of the games between 2004, 2008 and 2012.

Anita Fordjour has achieved the highest ranking of an athlete from Ghana, placing seventh in both T53 100m and T53 200m at the 2012 games in London before the Tokyo 2020 Paralympic Games which Emmanuel Nii Tettey Oku has beaten to take the most mark ever achieved by a Ghanaian at the Paralympic Games.