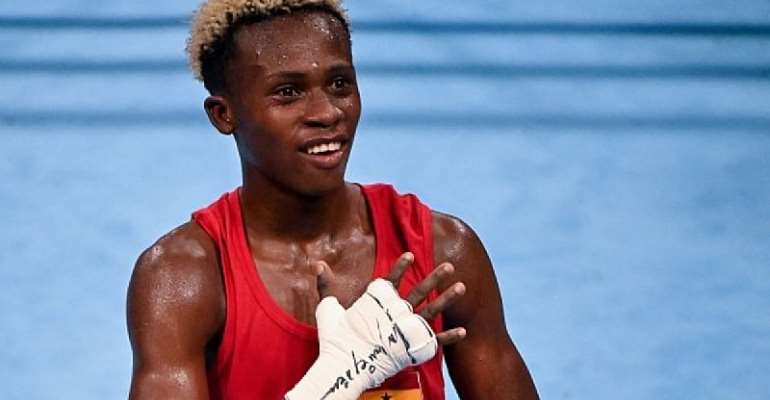 Rev. Benny Graceman Nortey, the man who discovered Samuel Takyi, Ghana’s hero at the 2020 Tokyo Olympic Games has revealed that the boxer displayed great ambition even when he was a little boy.

Although widely known in the boxing circle of the country prior to the Olympic Games, the young boxer has now become popular throughout Ghana after winning a bronze medal in the featherweight division at the games.

The success of Samuel Takyi is the first medal Ghana has won at the Olympic Games since 1988.

The 20-year-old goes into the history books as only the fourth boxer to win a medal for the West African country at the Olympic Games.

Wondering how the career of Samuel Takyi started amid his achievement at the Tokyo Olympic Games when other Ghanaian athletes are failing to make the mark?

Rev. Benny Graceman Nortey, a Pastor at Perez Chapel International at Techiman is the ideal man to tell the story.

He discovered Samuel Takyi at a boxing event at Watu near Bukom [a community in the Great Accra region known for boxing] and immediately recognised the fire in him to take up the sport.

As he tells Accra FM’s Rahman Kubaja, he catered for the young boy as his own son and was involved in his education and training, providing financial support from time to time after having a talk with his family.

Despite occasionally leaving school, the boxer took his training at the Discipline gym near Usher Fort very seriously.

There he was trained by popular trainer ‘Hard Man’ on behalf of Rev. Benny Graceman Nortey who assisted financially.

After his achievement at the Tokyo Olympic Games, Rev. Benny Graceman Nortey says he is not surprised because Samuel Takyi even as a small boy showed the desire and ambition to achieve great things in boxing.

He is expected to turn professional to aim for glory in the featherweight division of any of the World boxing champions [WBO, WBA, WBC, IBF].